The Young and the Restless Spoilers: Adam & Chelsea’s Revenge Plan Backfires – Did Adam Kill AJ Montalvo As A Young Child? 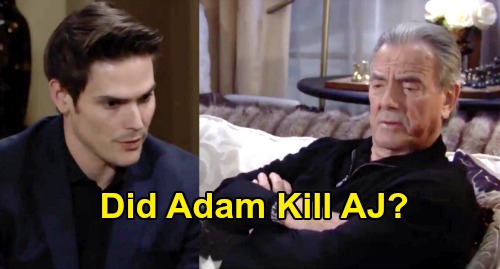 The Young and the Restless spoilers tease that Adam Newman (Mark Grossman) and Chelsea Lawson (Melissa Claire Egan) are playing a dangerous game. As Y&R viewers know, they’re pretty sure that there’s a big secret lurking in Victor Newman’s (Eric Braeden) past, and they’d like to find out what it is so they can use it as leverage to get Adam the Interim CEO spot at Newman Enterprises.

Adam was livid when Victor handed over the Interim CEO spot to Nick Newman (Joshua Morrow), and he wants nothing more than to land the top spot in his family’s company – at any cost, it seems. Chelsea has vowed to help Adam achieve this, and when they ran across Adam’s childhood friend Alyssa Montalvo (Maria DiDomenico) and she started talking about the mystery surrounding her dad AJ Montalvo’s death, Adam and Chelsea got interested.

As it turns out, AJ’s death was rather strange – he fell to his death and conceivably could have been pushed. That, in combination with the fact that Adam’s stepfather was also killed by a drunk driver and that Victor was in town during the time of AJ’s funeral has led Adam and Chelsea to surmise that Victor might have had something to do with AJ’s death. They’ve now got Alyssa on the case, since she’s a crime reporter, and they’re hoping she’ll investigate and uncover what happened.

But according to the Young and the Restless spoilers, Adam’s big plan is going to backfire in a pretty spectacular way. That probably means that whatever Alyssa finds isn’t going to help him win that Interim CEO seat, and that could very well mean that there’s a lot more to this mystery than what Adam and Chelsea think.

Adam and Chelsea are simply assuming that Victor was somehow mixed up with AJ, who was a loan shark, or that perhaps Victor was possibly protecting Adam’s mom Hope Wilson (Signy Coleman) from AJ at the time of his untimely death. But what if what Alyssa digs up is completely contrary to what Adam and Chelsea are assuming?

What if the reason that Adam and his mother didn’t go to AJ’s funeral was because Adam himself had something to do with AJ’s death? Sure, Adam was a little kid at the time, but given that AJ could have been pushed to his death, it’s possible that someone a lot smaller than him could have done the deed, if they caught him by surprise. What if AJ was harassing Hope, and Adam pushed AJ to his death?

Of course, it’s always possible that Hope herself could have killed AJ. Either of these possibilities could have resulted in Victor rushing to the scene and being there during the time of AJ’s funeral. Stranger things have certainly happened on soaps, and Adam has said that his memory for that time is fuzzy – could he be suppressing some horrible memories, either of himself or Hope killing AJ?

We’ll see what happens here, but it certainly seems like there’s a surprise twist coming in this story that’s going to shock Adam and Chelsea. Do you think it’s possible that Adam could be responsible for AJ’s death? Stay tuned to the CBS soap and check back with us often for the latest Young and the Restless spoilers. Remember, CDL is your trusted source for Y&R updates and news.