The Young and the Restless Spoilers: Amanda and Devon Are Family – New Romantic Couple Pushes Elena Out 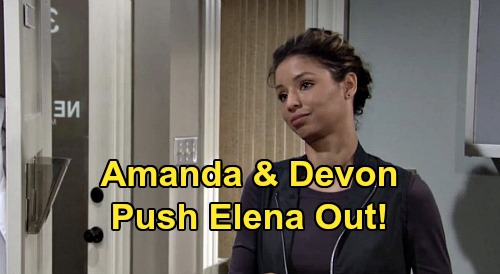 The Young and the Restless spoilers document that Amanda Sinclair (Mishael Morgan) and Devon Hamilton (Bryton James) are not in the process of re-imagining Hevon. Instead, they are family, because Hilary Hamilton (Morgan) has been confirmed as Amanda’s sister.

The experience of learning that Amanda was more than a look-a-like has made a natural, dramatic impact. She’s overjoyed, while Devon was momentarily defensive.

The quick realization that both characters have actually been family for years is rather stunning. Long before Amanda first appeared at Devon’s penthouse door, she was his sister-in-law.

Devon and Hilary’s love story was non-traditional. She was his father’s wife, but in time Neil Winters (Kristoff St. John) acknowledged that Hilary belonged with his adopted son.

Hilary and Devon were first married in the mid 2010’s, which was a few years after Morgan debuted on Y&R. They were briefly divorced before Devon married Hilary on her literal death bed, which came as Morgan was being written out of the show, per her amicable departure from the cast in 2018.

Hevon fans were thrilled to learn that Morgan was rejoining the cast last summer. The creation of an entirely new persona then gave this stellar actor further room to grow.

It’s always interesting to see characters directly address the soapy reality they are facing. That happened when Nate Hastings (Sean Dominic) and Devon were discussing the weirdness of realizing that Hilary has an identical twin sister, with that information just being revealed as well.

Devon’s deep grief in losing Hilary and their unborn baby, as the result of the car accident Lily Winters (Christel Khalil) didn’t want to cause, led to devastating psychological effects. But Elena Dawson’s (Brytni Sarpy) entrance into Devon’s life helped him to heal.

Young And The Restless Spoilers – Elena Dawson Is Concerned

Considering the referenced weirdness of the situation, anyone would be concerned about the future. But Elena’s response to Amanda’s presence in Genoa City, Wisconsin, has actually been restrained to-date.

A bonding session at the Grand Phoenix’ Escape Club also appeared to telegraph a potential friendship that still might be realized.

But, as recent events unfolded, Elena has expressed her fears to Nate and then Devon. James’ character recognizes his current love’s insecurities and hopes to allay them.

But it’s fair to suggest that Devon can’t know what might happen in the short- or longterm future based on the staggering surprise of Amanda’s existence and now, family tie. The chances that Amanda and Devon will wind up as a romantic couple are huge.