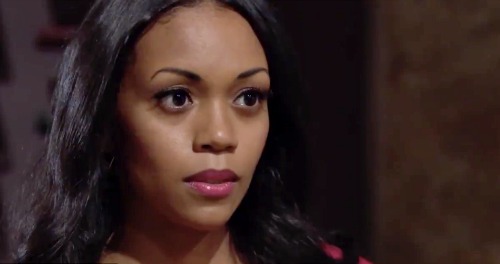 The Young and the Restless spoilers tease that Hilary Hamilton (Mishael Morgan) will be confirmed as Amanda Sinclair’s (Morgan) identical twin sister. That anticipated reveal will spark significant shits in the Genoa City, Wisconsin, relationship landscape.

Billy Abbott (Jason Thompson) has been playing it cool with Amanda, due, in part, to her stated interest in Nate Hastings (Sean Dominic). But the DNA results will cause the projected couple to talk.

A year ago, in the summer, Amanda was new in town. She brought controversy with her. Colin Atkinson (Tristan Rogers) was the cause of Amanda’s professional pain, as he used her resemblance to Hilary as a tool to throw Devon Hamilton (Bryton James) off course.

Amanda had no idea that she was chosen because of her doppelganger resemblance to Hilary. Colin seemingly didn’t know that she would eventually be confirmed as Hilary’s identical twin and wouldn’t have cared if he did, unless there was some way to exploit that reality.

Now, as viewers watch Morgan work in September 2020, her second character is new no longer. Y&R’s successful build of this character is allowing the needed resolution of this hanging backstory to be resolved.

Young And The Restless Spoilers – Billy Abbott Generally Steady, Except When He’s Not!

Billy is Billy, as Lily Winters (Christel Khalil) knows. She recently asked him what’s going on between him and Amanda, which generated a verbal deflection.

Thompson’s character is very protective of his feelings after leaving Vickie Newman (Amelia Heinle). The end of Villy was fully his decision, with the emotional link to Amanda resembling a need to find another stable person to be with.

Billy knows that he can go off-track fast. So, he’s relied on various people through the years to help him either maintain stability, or regain it. Vickie, his brother, mother, and even Phyllis Summers (Michelle Stafford), for awhile, filled that role. Now, Billy sees Amanda as the person who he could love and also lean on.

Billy was someone Amanda felt safe confiding in following the Ripley Turner (Christian Keyes) situation. She’s come to care about Billy and for now it’s just a crush.

Nate is a nice guy, who Amanda is sincerely attracted to. But to-date she’s drawn to Billy, specifically meaning that he’s touched her heart.

Amanda has remained on his mind since they first met. Her proximity at Chance Com and their ongoing conversations about their veiled feelings for each other implies that love will be realized. So, the Hilary reveal is the natural next step in that progression.