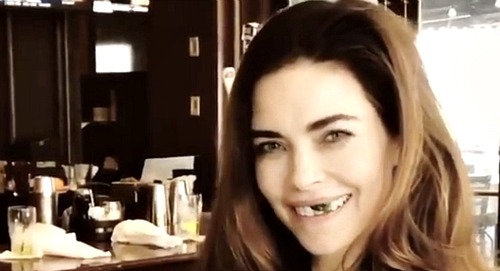 The Young and the Restless spoilers has some great news to pass on about a popular Y&R star. Amelia Heinle, who portrays Victoria Newman on the CBS soap, is celebrating her 15-year anniversary on the show, and she recently shared some messages on her Instagram feed to commemorate the happy occasion.

First, Amelia shared a happy picture of herself with Eric Braeden, who portrays her on-screen father Victor Newman. It’s a great picture with both Amelia and Eric looking happy together and enjoying each other’s company.

Amelia’s caption reads: “15 years! Thanks to everybody at Y&R and all of the fans of the show. Every day I am grateful to God for all of you.”

Amelia’s followers have flooded her replies with well-wishes and nice comments about the picture and about her anniversary. For example, one follower replied: “OMG. 15 years already – congratulations. I couldn’t dream of a better Victoria. You were made to play her.” And another said: “Love you, Amelia. You’re a great actress.”

But Amelia didn’t stop there – she later posted a hilarious video of Joshua Morrow, who portrays her on-screen brother Nick Newman. In the video, Joshua plays the piano to the theme of Y&R and goofs around to the camera. It’s worth a watch – you can view the video below.

Amelia captioned the Joshua video as follows: “Because it’s my 15-year anniversary!” Several of Amelia and Joshua’s co-stars have commented on the video, with Jason Thompson (Billy Abbott) saying: “And he would only do that for you. Happy anniversary @ameliamheinle. You’re an absolute gem.”

And Lauralee Bell (Christine Williams) said: “More Newman talent! Happy anniversary.” Finally, a fan chimed in as well, with an interesting suggestion for future programming: “This is what you could fill the hour slot with! Life at home for all you goofballs!”

Amelia also posted a classic video of her with terrible teeth! In fact toothless Victoria Newman parading around the bar has got to be seen to be believed – check it out below!

At any rate, we wish Amelia a happy Y&R anniversary, and we hope to see her on the show for many more years. Of course, right now is an interesting time for Victoria, given that she’s dealing with the resulting trauma of her stabbing at the hands of Ripley Turner (Christian Keyes).

Hopefully, we’ll see Victoria back in the Newman CEO spot in the days to come. All our best wishes for Amelia as she celebrates her special anniversary on Y&R! Stick with the CBS soap and don’t forget to check CDL often for all the latest Young and the Restless news and spoilers.