The Young and the Restless Spoilers: Billy and Victoria Split Confirmed – Will Billy Turn To Amanda?

BY hellodrdavis on January 22, 2020 | Comments: one comment
Related : Soap Opera, Spoiler, Television, The Young and the Restless 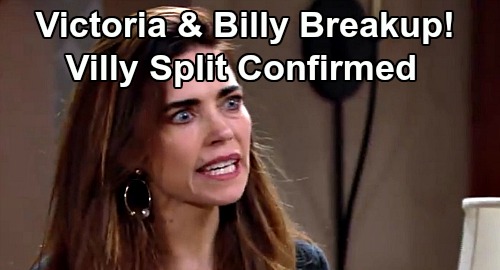 The Young and the Restless spoilers tease that Billy Abbott (Jason Thompson) is in for a rude awakening as official Y&R spoilers say he and Victoria will split. Billy and Victoria Newman (Amelia Heinle) have been having real difficulty connecting lately. Billy has felt for some time now that he can’t go to Victoria with his problems, because of her tendency to see him as broken and in need of fixing.

Billy just can’t stand it that Victoria sees him this way, and rather than dealing with it head-on, he turned to another woman – Amanda Sinclair (Mishael Morgan) – for support. And once Billy confessed his friendship with Amanda to Victoria, she totally blew up.

It really stung for Victoria when she learned that Billy had found someone else to confide in, and the fact that it was another woman didn’t help.

In fact, Victoria has been hostile to Billy ever since she found out about his friendship with Amanda. As Victoria sees it, Billy decided to get emotionally intimate with another woman, while at the same time dropping his therapist.

Victoria thinks that Billy lives for chaos and got some thrill out of sneaking around and having a clandestine relationship with Amanda.

As Y&R viewers know, Billy has tried to talk with Victoria about all of this, but Victoria has been pretty ruthless with him. It seems to be her way or the highway, and she’s now demanding that Billy get help for his problems and become the same man that she used to know, otherwise she’ll reject him, and their relationship will be over. That’s a pretty big ultimatum.

Well, it looks like Billy may outright refuse to admit that he needs help, let alone re-start therapy or even go to Gambler’s Anonymous again. The Young and the Restless spoilers say it’s confirmed that Billy and Victoria will split up, but will it be Victoria who ends things or Billy?

So far, Victoria has been the one who has essentially threatened to leave, but it’s always possible that Billy will get tired of the way Victoria see him and will be the one to walk. And once Billy and Victoria do split up, what will that mean for his relationship with Amanda?

Amanda seemed pretty certain when she previously told Billy that she wasn’t looking to have an affair with him, so who knows if she would even be interested in Billy if he was free of his relationship with Victoria. Yet it does seem that there’s a definite spark between Billy and Amanda, so you never know.

What do you think? Do you expect to see Billy and Amanda get together after “Villy” break up? Stay tuned to the CBS soap and don’t forget to check CDL often for the latest Young and the Restless spoilers, updates, and news.