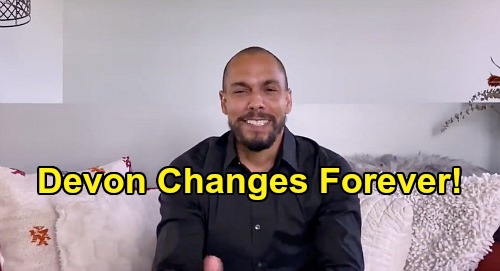 The Young and the Restless spoilers document that Bryton James (Devon Hamilton) second Emmy award was particularly meaningful. The actor followed his first win in 2007, in the Outstanding Younger Actor in a Drama Series category, with his second honor during the forty-seventh annual Daytime Emmy Awards ceremony.

The 2020 Emmy came in the Outstanding Performance by a Supporting Actor in a Drama Series category. James made his virtual acceptance speech especially meaningful when dedicating his award to the late Kristoff St. John (Neil Winters), who was his mentor and friend.

Young And The Restless Spoilers – It Seems So Long Ago

The good old days sometimes seem so long ago. At other moments they feel like yesterday.

James, who was born in 1986, joined the cast of Y&R in 2004. Devon’s storyline eventually had Drucilla Winters (Victoria Rowell) and Neil become his adoptive parents.

Devon became an important part of the show as the years passed. The deafness storyline, in particular, not only raised awareness but was also played with consistently realistic dexterity.

Hevon became one of the show’s top power couples during the 2010’s, with James and Mishael Morgan (initially portraying Hilary Hamilton and now playing Amanda Sinclair). Hilary’s demise in 2018 established a crescendo into James Emmy performance within the last year.

Young And The Restless Spoilers – Devon Hamilton At A Crossroads?

It appeared as though Devon’s personal life was back on track. Hamilton-Winters was doing well and charitable efforts, most importantly including the New Hope project, were succeeding.

But soap opera fans know that drama drives daytime. So, they were anticipating one, or more parts of Devon’s life to be disrupted as the spring was playing out. Then, the production shutdown became necessary and the last new episode of Y&R was seen in late April.

Viewers saw the clear signal the moment Amanda appeared at Devon’s penthouse door. She was Hilary’s identical twin and a reimagined version of Hevon would take hold between Amanda and Devon over time. But Amanda’s genetic backstory hasn’t even been pursued yet.

It could be that Devon and Elena Dawson (Brytni Sarpy) marry and have a family, whether or not Amanda is Hilary’s sister. As of the moment Morgan’s current character is interested in Billy Abbott (Jason Thompson) and Nate Hastings (Sean Dominic).

But those romantic pursuits could represent a distraction, with Amanda becoming Devon’s destiny in the nearing future. CDL is a leading source for everything linked to The Young and the Restless. Check back regularly for Y&R spoilers and news!