The Young and the Restless Spoilers: Cane’s Fate Decided as Devon Uncovers the Whole Truth – Will Cane Be a Hero or a Villain? 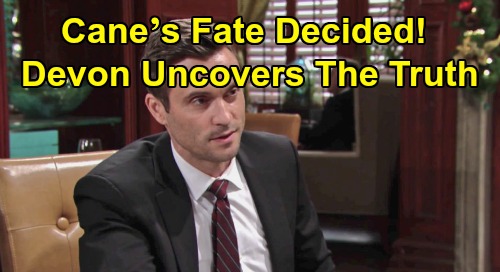 The Young and the Restless (Y&R) spoilers tease that Devon Hamilton (Bryton James) is ready to move forward and put a truly awful year behind him. After losing Hilary Hamilton (Mishael Morgan) in 2018, Devon lost Neil Winters (Kristoff St. John) in 2019 and then lost his fortune, too. He’s still a successful businessman, but this is about more than money.

As Devon mentioned, this is about Katherine Chancellor’s (Jeanne Cooper) wishes. Katherine wanted Devon to have her billions, so he’s exactly who they should go to. Now that 2019 is over and 2020 has begun, it’s unfair to just leave this loose end dangling.

The Young and the Restless watchers are waiting on this storyline to be resolved. Y&R can’t just disrespect Katherine’s memory like this and never fix it. That doesn’t seem right and certainly isn’t something viewers would ever approve of. Many fans are hoping that 2020 will bring the resolution that we’re all looking for.

Of course, that means Y&R will have to reveal Cane Ashby’s (Daniel Goddard) involvement or lack thereof. It feels like they purposely left this as something that could go either way.

Cane seemed sincere when he assured Devon that he had nothing to do with the scam. However, Cane was a con artist in the past and knows how to seem genuine. So far, there’s nothing that proves it wasn’t an act.

In a recent chat with Jill Abbott (Jess Walton), Devon pointed out he still wasn’t convinced of Cane’s innocence. It might be significant that Devon’s still questioning whether Cane was in on Colin Atkinson’s (Tristan Rogers) scheme.

Devon insisted that the truth would come out sooner or later, so is that a promise from Y&R? Is it a hint that they’ll indeed finish this story in the months ahead?

Devon has vowed that whoever played a part in violating Katherine’s wishes will pay. Will that end up including Cane? There are a couple ways Y&R could take this. Cane could become the hero who finds Cane’s money and gives it back.

Then again, Cane may have been lying about his involvement. In that case, Cane could get busted and go down along with Colin.

Whether either of these options happens onscreen or not, this will storyline definitely needs to be concluded. The Young and the Restless spoilers are pointing in that direction if Devon’s own words are any indication.

Let’s hope Devon can get his fortune back and truly begin a new chapter in 2020! We’ll give you updates as other Y&R news comes in. Stay tuned to the CBS soap and don’t forget to check CDL often for the latest Young and the Restless spoilers, updates and news.