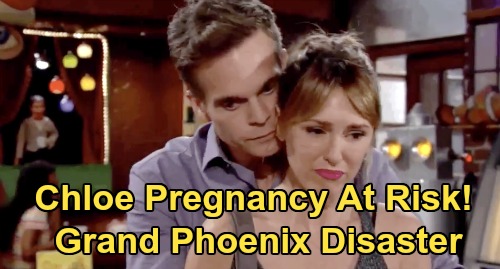 The Young and the Restless (Y&R) spoilers reveal that Chloe Mitchell (Elizabeth Hendrickson) and Kevin Fisher (Greg Rikaart) recently took an important step, which Kevin was awfully nervous about. As happy as Kevin was about their impending bundle of joy, he felt like sharing the news would make it real. Of course, making it real means the potential for major drama.

Now that word has spread about Chloe’s pregnancy and everyone’s excited for blissful couple, there could be some trouble brewing. There’s pretty much never been a soap pregnancy that didn’t come with a few problems along the way. Chloe’s first one could come through her surprisingly dangerous job.

Y&R fans know Chloe works at the Grand Phoenix, which has had some crazy incidents over the past few months. That includes a hostage situation that could’ve had a deadly outcome. Chloe thankfully wasn’t around that day, but she might be the next time chaos breaks out – and it will break out!

The Young and the Restless spoilers say disaster will strike at the GP once again, so there may be concerns about Chloe’s pregnancy. It’s reasonable to think so between Kevin’s “real” comment and Connor Newman’s (Judah Mackey) growing concerns about the hotel.

Y&R is building toward a big Grand Phoenix shocker, so will it be one that sends several Genoa City residents to the hospital?

After all, the show’s already got that hospital set ready and waiting. They’ve been using it for Sasha and her baby as well as Sharon Newman’s (Sharon Case) cancer storyline, but there are more opportunities.

Since The Young and the Restless seems to be trying to liven things up and boost the ratings, it makes sense to do an emergency storyline that ties in plenty of people.

Chloe and Kevin have mostly been given fluffy fun material since they returned – at least after Chloe resolved her Adam Newman (Mark Grossman) issues and helped Billy Abbott (Jason Thompson) with his own. It’d be great to see something a little more dramatic for Kevin and Chloe.

Naturally, everything would turn out fine since Elizabeth Hendrickson is pregnant in real life. They wrote her pregnancy in, so they’ll want to keep it going as Hendrickson’s baby bump grows.

Even so, Chloe’s not to going to face this experience without the usual soapy baby drama. This could be the first inevitable hiccup as Kevin and Chloe prepare to add to their brood.