BY hellodrdavis on January 5, 2020 | Comments: one comment
Related : Soap Opera, Spoiler, Television, The Young and the Restless 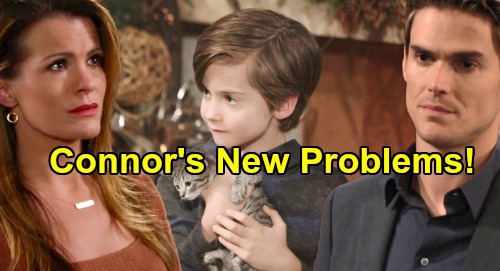 The Young and the Restless spoilers tease that Connor Newman (Judah Mackey) will soon be beyond happy, as he learns that Chelsea Lawson (Melissa Claire Egan) is no longer with Nick Newman (Joshua Morrow) and that he and his mom will be living with Adam Newman (Mark Grossman) permanently. As Y&R viewers know, this is exactly what Connor has been wanting for months, as he’s been longing for his parents to get back together.

Well, during the week of January 6th, “Chadam” fans get what they’ve been longing for, and Chelsea and Adam will officially reunite as a couple. Although Chelsea previously has said that she needs time before they formally get back together, it looks like she’ll soon be ready to announce to the world that they’re a couple again.

Chelsea’s shown in the new Y&R promo telling Chloe Mitchell (Elizabeth Hendrickson) that she’s giving her relationship with Adam another shot, much to Chloe’s horror.

While it doesn’t seem that Chelsea and Adam are getting back together just for the sake of Connor, he does factor heavily into their feelings for each other and their desire to be together.

And, let’s face it, Connor did have a lot to do with them getting back together. He was pretty much responsible for Chelsea moving into the penthouse in the first place, which was really the beginning of the end for her and Nick.

And Connor’s deep psychological problems was a big impetus for Adam and Chelsea to come together and start acting civilly toward each other again. Although it hasn’t been mentioned on the show for a while, we can’t forget that Connor harmed himself by jumping off the jungle gym and breaking his arm when he was upset with his father for leaving town.

And more recently, Connor has lied and manipulated in order to get his parents together. One wonders whether Connor’s problems are magically going to go away now that his parents are back together.

Perhaps they will, but it would seem that a child who purposely hurt himself, lied, locked his cousin/brother in a garage, manipulated his parents, and got expelled from school probably wouldn’t just quit that behavior suddenly, even when he got what he wanted.

We’ll see what happens, but it could make for an interesting storyline if Connor’s dark side continues to show itself here and there, especially if Adam and Chelsea have different opinions about how to best handle those problems.

It just seems too easy for everything to be rosy for the three of them (or the four of them if you count the new kitten) going forward. After all, Connor has seemed pretty troubled, and one might expect to see more problems develop.

For example, what if his new kitten were to die and Connor freaked out? Or perhaps he won’t want to go back to school and be away from his parents? Or he might still have trouble relating to the other kids at school once he goes back. Any of those possibilities would make for a compelling storyline and could pose challenges for Adam and Chelsea going forward.

Time will tell what happens here, but we could see Connor face more difficulties down the road. Do you think that Connor’s problems are behind him now? Stay tuned to the CBS soap and don’t forget to check CDL often for the latest Young and the Restless spoilers, updates, and news.