The Young and the Restless Spoilers: Devon & Amanda Find Love While Discovering Her Real Bio Mom? 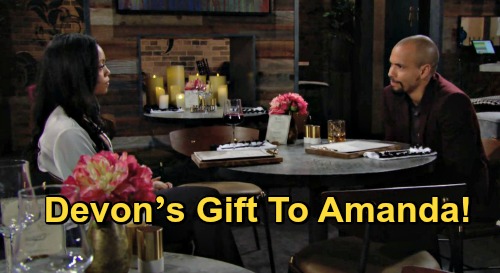 The Young and the Restless spoilers tease that Devon Hamilton (Bryton James) has had a lot to deal with lately. As Y&R viewers know, Devon learned in a very unpleasant way that Elena Dawson (Brytni Sarpy) and his cousin Nate Hastings (Sean Dominic) slept together, and then Devon seriously injured Nate, possibly permanently stifling Nate’s career as a surgeon.

Now Devon seems to want to focus on other things and get his mind off of Elena and Nate’s cheating, and recently he’s turned to Amanda Sinclair (Mishael Morgan) for comfort.

Well, during the week of October 26-30, The Young and the Restless spoilers say Amanda will get a big shocker while she’s in Devon’s presence. After lending an ear to Devon so that can vent about everything that happened, Amanda and Devon will head back to the Grand Phoenix where Amanda will get some information from the private investigator that she hired to locate information on her birth.

This will all greatly interest Devon, and Amanda won’t mind sharing the information with him.

Amanda will learn that the private investigator talked to a woman who lived in the same apartment complex as her birth mother, Rose. As it will turn out, the woman will remember never seeing Rose pregnant, but then suddenly seeing her with a new baby.

That certainly sounds like Rose may not actually have been Amanda and Hilary Curtis Hamilton’s (Mishael Morgan) birth mother, and that can only mean one thing – that the real birth mother could be out there somewhere to find.

We imagine that once Amanda and Devon process this information for a while, they’ll definitely want to explore it further. Amanda is really on the quest for answers about where she came from and why she got separated from Hilary in the first place, and something tells us that Devon will want to help Amanda find the answers she needs.

And who knows – the search could lead to more than just information. It’s entirely possible that Amanda and Hilary’s birth mother is still alive, and that means that a big reunion could be on the horizon for Amanda and her mom.

This is something that Devon could put his resources behind, and he could end up giving Amanda quite the meaningful gift – an actual blood relative, something that Amanda has craved for her whole life.

If all of this does happen, then we’ll expect to see Devon and Amanda grow even closer in the days and weeks to come as they fall in love. Of course, The Young and the Restless spoilers say this will be happening as Elena continues to beg Devon for another chance – something that’s probably pretty unlikely at this point.

Elena may have to watch Devon and Amanda get closer and bond over their quest to find Amanda’s birth mom, and that will probably be exceedingly difficult.

We’ll see what happens here, but it certainly looks like Amanda’s heading for a big reveal where her birth mother is concerned. Do you think that Devon and Amanda will reconnect to her bio mom after all these years  and find love along the way?

Stay tuned to the CBS soap and be sure to keep CDL bookmarked so you don’t miss any of the most recent Young and the Restless spoilers, updates, or news.