The Young and the Restless Spoilers: Eric Braeden Appears In Major Motion Picture – ‘Den of Thieves’ Now Available On Netflix

BY hellodrdavis on May 2, 2020 | Comments: Leave Comments
Related : Soap Opera, Spoiler, Television, The Young and the Restless 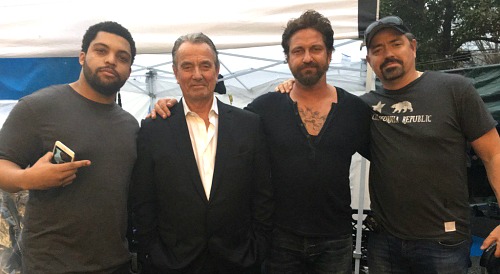 The Young and the Restless spoilers has some news to pass on about a popular Y&R star. Eric Braeden, who portrays Victor Newman on the CBS soap, can currently be seen in a cameo role in his son’s movie “Den of Thieves,” which dropped on Netflix on May 1st.

“Den of Thieves” was released in the US back in January 2018 and stars Gerard Butler, Curtis “50 Cent” Jackson, Pablo Schreiber, O’Shea Jackson Jr., Evan Jones, Dawn Olivieri, Mo McRae, and Max Holloway. The movie is about an elite group of sheriff deputies who try to stop a gang of thieves who are planning to rob the Federal Reserve in Los Angeles.

The movie grossed $80 million worldwide when it was released back in 2018, and there is currently a sequel in development. It was written, directed, and produced by Christian Gudegast, who is Eric Braeden’s son. Eric plays the role of Ziggy Zerhusen in the movie, and there’s no indication at this point about whether Eric be in the follow-up film as well.

Eric was excited to share the news about “Den of Thieves” coming to Netflix, and he announced the news on his Twitter feed. Eric shared a short video of Gerard Butler and some of the other stars of the movie announcing that the movie was dropping on Netflix along with the following caption: “DEN OF THIEVES, my son CHRISTIAN GUDEGAST’S film, with GERARD BUTLER starring, is coming to NETFLIX on MAY FIRST! Riveting story!”

Eric’s followers on Twitter offered many replies, with most saying they were looking forward to seeing the movie, and Eric responded to some of the comments. One fan said: “I’m a Gerard Butler fan, so I’m looking forward to this. Best wishes to your son’s future success!” Eric replied, “Thank you, that’s nice! I’ll tell him!!”

And another fan said: “Looking forward to watching the movie! I’m sure your son is just as fabulous actor as his Dad.” Eric replied, “He was the writer and director on this one, Denise! He doesn’t want to act.” Finally, someone said: “Have heard nothing but GREAT stuff about it!! Proud papa!!! HURRAH!!!”

At any rate, the movie is available now on Netflix, and it would be a great way to kill some time while seeing what is sure to be a great story. Are you going to check out “Den of Thieves?” Stick with the Young and the Restless and keep checking CDL for the hottest new Y&R news and updates.

DEN OF THIEVES, my son CHRISTIAN GUDEGAST’S film, with GERARD BUTLER starring, is coming to NETFLIX on MAY FIRST! Riveting story!! pic.twitter.com/Aik5FBUCzU