BY hellodrdavis on January 31, 2020 | Comments: one comment
Related : Soap Opera, Spoiler, Television, The Young and the Restless 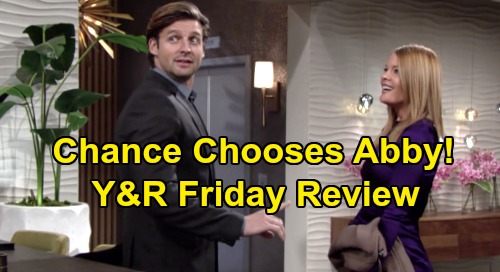 The Young and the Restless spoilers review for Friday, January 31, tease that Sharon Newman (Sharon Case) will tell Faith Newman (Alyvia Alyn Lind) about how she’s getting her port installed today, which will be how her chemotherapy treatments are given. Nick Newman (Joshua Morrow) and Mariah Copeland (Camryn Grimes) will be on hand as well, and Sharon will tell her girls to go have productive days and not to worry about her.

After everyone else exits, Rey Rosales (Jordi Vilasuso) will tell her that she did great with her family, and they’ll head out to the hospital for the procedure. Meanwhile, at the Grand Phoenix, Chance Chancellor (Donny Boaz) and Abby Newman (Melissa Ordway) will chat and flirt, with noticeable chemistry between them. Soon, Phyllis Summers (Michelle Stafford) will saunter over and make provocative comments about how “amazing” her date with Chance was.

Afterwards, Chance will clearly tell Abby that nothing happened on his date with Phyllis, and he’ll broach the subject of their relationship, wondering how she feels about him. She’ll say that she likes him, and as she’s explaining, he’ll blurt out that he doesn’t want Phyllis – he wants her. She’ll answer him with a passionate kiss.

Meanwhile, over at Society, Mariah will leave Tessa Porter (Cait Fairbanks) a lengthy voicemail, then she’ll recognize the new woman working behind the bar – she’ll call her Lindsay (Kirby Bliss Blanton) and they’ll mention that they used to hang out at another bar. They’ll reconnect and talk happily with an easy rapport.

Through their conversation, Lindsay will hear about Tessa’s tour, as Mariah talks her up. Lindsay will think that Mariah’s leaving herself out of the conversation and she’ll wonder what’s up. Mariah will say it’s complicated, and she’ll allude to someone in her life who’s going through something. Lindsay will listen and offer some solid advice.

As they’re traveling together, Tessa and Tanner Watts (Chase Coleman) will talk comfortably and sing together. Afterwards, they’ll chat about Tanner’s girlfriend, who is a “designer label” type who’s nothing like Tessa. Tessa will jokingly say that he wanted to find someone opposite of her after their divorce.

Over at Crimson Lights, Sharon and Rey will return after Sharon’s port procedure. Rey will be hesitant to leave Sharon and will think that she shouldn’t be returning to work, but Sharon will insist and shoo Rey away. Phyllis will plop down at a table and notice Sharon’s bandage on her chest. She’ll inquisitively ask questions, wondering if Sharon got a tattoo.

Sharon will say yes, but Phyllis won’t buy it, and soon Faith will come in, with Sharon hushing her from talking about how Sharon is doing as Phyllis comes up for a refill. Phyllis will be getting very suspicious and concerned by this point, worrying that there’s something really wrong with Sharon. Nick will then arrive and embrace both Faith and Sharon, and Phyllis will see.

Sharon will see this taking place, and after Phyllis leaves, she’ll grump at Nick for telling Phyllis. Nick will insist that he didn’t tell her, but Sharon will get upset, worrying that Phyllis will go blab to the world about her problem. Faith will then come along and tell her mom not to be upset, and that they all need to take deep breaths. Later, Sharon will again gripe at Nick about the Phyllis situation, and he’ll promise Sharon that she won’t say anything.

Back at Society, Rey will meet with Paul Williams (Doug Davidson) and delicately ask him for a lighter load at work. Paul will wonder what’s going on and will say that Rey can confide in him, but Rey will say that he can’t talk about it just yet. Paul will agree to lighten Rey’s workload for the time being so that Rey can focus on what he needs to focus on.

Meanwhile, at the bar, Mariah will continue talking with Lindsay, and soon she’ll text Tessa that she loves and misses her. Tanner will reply, saying that Tessa is at soundcheck and that he’ll pass on the message. This will totally weird out Mariah, and Lindsay will notice her expression as she looks at the text. Lindsay will then put her foot in her mouth by going on about all the wild things that happen on tour. Mariah will be shaken.

Back at the Grand Phoenix, Chance and Abby will be interrupted by Chance’s phone. He’ll step away to take the call, and the person on the other end will tell him that “she” is asking questions. He’ll tell the person to keep tailing her, and that he wants to know every move she makes. Meanwhile, Phyllis will arrive looking unnerved by the Sharon situation. Abby will pounce on her, letting her know that Chance chose her.

Phyllis won’t really respond, and she’ll just walk away, refusing to argue. Abby will find that odd and wonder what’s going on. Phyllis will try to get away, but Abby will persist, until finally Phyllis yells that she’s not interested in Chance, that Abby won, and that there are more important things – and people – in the world.

Abby will try to get out of Phyllis what’s happened, but Phyllis won’t spill the information she knows. Abby will then remark that even though she’s not going to spill the details, whatever’s going on will eventually come out because it always does.