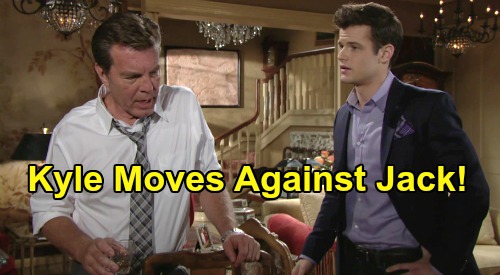 The Young and the Restless spoilers document that Kyle Abbott (Michael Mealor) was once overly influenced by the perceived great, Victor Newman (Eric Braeden). He lived with the Moustache and thought of him as a father figure. So, could that former plot line be further mined in modern times?

Jack Abbott (Peter Bergman) has been in the process of stepping back from daily responsibilities at Jabot for awhile. He’s shifted focus to his mother, Dina Mergeron (Marla Adams), who continues to battle Alzheimer’s.

As part of Jack’s efforts he’s empowered Kyle to serve in a co-leadership role at the family company. The intent is to have Mealor’s character slowly take the reigns. But crisis has often provided opportunity in Genoa City, Wisconsin.

Jabot is not a worldwide conglomerate. It’s a cosmetics company that Jack wants to redirect to its core mission.

In an effort to go back to the initial vision that John Abbott (Jerry Douglas) conceived and built, Jabot’s focus will be on its main products. Summer Newman (Hunter King) and Kyle baited Theo Vanderway (Tyler Johnson) to use one of Jack’s old pitches as part of a winning formula that fully secured Kyle’s main seat at Jabot’s table. The elimination of Theo can allow Kyle to shift his own focus to Jack.

Kyle looked down on Theo even before he knew Johnson’s character was his cousin. So, that interpersonal battle could be described as a mismatch, with Theo never being on the same footing due to his new guy status.

Jack is an entirely different reconsideration. Kyle once thought of his father as standing in his way and may still see him that way. But Jack is above him and will be a challenge to oust. Now that Kyle has destroyed Theo do you think he’ll turn on his dad?

Young And The Restless Spoilers – Classic Skirmish In A New Form

Viewers haven’t forgotten that Kyle felt entitled to the top spot at Jabot, which prompted Jack to agree to the power-share. Meanwhile, Victor has time on his hands, as he’s allowed Vickie Newman (Amelia Heinle) to run the show at Newman.

Tapping into the classic skirmish between Victor and Jack by having Kyle somehow maneuver his dad out of Jabot would produced something new. Vickie would represent the Newman’s and Kyle would lead the Abbott charge as both companies battled for cosmetics superiority.