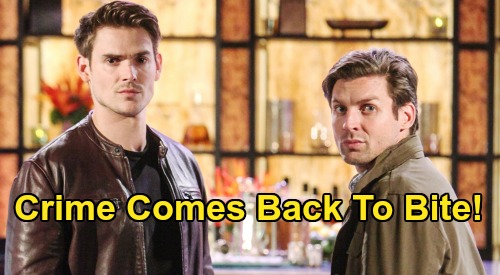 The Young and the Restless spoilers document that one of Y&R’s newer couples could fizzle by summer’s end. Chance Chancellor (Donny Boaz) and Abby Newman (Melissa Ordway) created what seemed like a very promising pairing. However, a situation that involved Chance can serve to separate Chabby in the near future.

As viewers recall, Adam Newman (Mark Grossman) revealed that he killed a man Chance was tracking while working undercover in Las Vegas, Nevada. That backstory fleshed out the connection between two unlikely friends.

The described circumstances appears to make Adam’s claim of self-defense legitimate. But he and Chance apparently never reported the man’s death, which teases danger ahead.

Adam and Chance discussed the widow of the man that was killed having been told that her husband entered the Witness Protection Program. She’s been paid a monthly stipend by Adam as part of both men’s plan to keep her in the dark.

But the woman who doesn’t know she actually lost her husband was asking pressing questions when viewers last saw fresh episodes in the spring. Adam believes he tamped that problem down with his most recent trip to Nevada, though it felt like that plot point was raised as a teaser of building drama.

Young And The Restless Spoilers – Drama Furthered By Mid August?

The as yet unknown character who was referenced above seems bound to learn what really happened to her husband. The actor who would play that role could arrive in Genoa City, Wisconsin, during any scene that will be seen in the near future.

Production is tentatively set to resume on July 13. Y&R fans could see the continuation of this storyline by mid August if all goes well with the anticipated regular recording schedule.

Adam’s bravado has often led him to believe that he can control reality. In order to do so he’ll need to produce the impossible, which would be to resurrect the man who lunged at him in Vegas. Unless, of course, that character isn’t really dead?

The villain was said to be a shady guy, which is why Chance was pursuing him. So, his spouse may have ties to underground figures who help her to find Grossman and Boaz’ characters.

Assuming that discovery happens in GC, Adam and Chance might be forced to tell the lady that she’s a widow. That could result in both men being arrested, which would force Chabby to be apart. Adam, on the other hand, often seems to either avoid, or escape jail.