The Young and the Restless Spoilers: Is It Realistic To Keep Summer and Kyle Together – Y&R’s Skyle Future Revealed 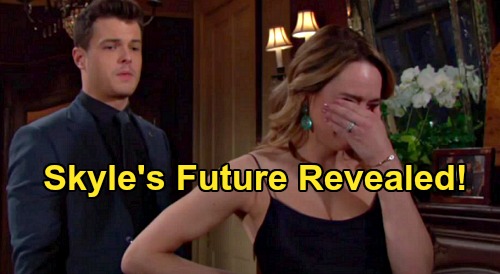 The Young and the Restless spoilers document that Kyle Abbott (Michael Mealor) and Summer Newman (Hunter King) appear headed toward remarriage and having children. But the questionable reboot of this couple that Y&R presented to the audience could be followed by a reversal of course if a change in direction is pursued.

Swiftly breaking Kola was a harsh end to what had been an extensive build up. Viewers bought into the intended emotional attachment that was created for these characters. Skyle will likely be seen later this summer if steady progress can be made with return to production approvals. But will it be realistic to keep this pair together then?

A number of actors have played Kyle over time. Mealor became the latest recast in 2018. His efforts have been strong.

Mealor also has demonstrated believable chemistry with King when Kyle and Summer were together and apart. So it’s not either actor’s skill that’s in question. Instead its something more basic.

Earlier editions of Skyle didn’t achieve all-time great Y&R couple’s status. So this revival can’t be honestly pushed as something large swaths of the audience was clamoring for.

Young And The Restless Spoilers – Current Circumstances Do Count

It is reasonable to suggest that Kyle never loved Lola Rosales (Sasha Calle) as deeply as he did, or does Summer. That point is one to dig into, as Kola could have been a rebound, or a reaction to the negative pressure Summer was relentlessly applying to Kyle a few years ago.

Considering where Kyle is today, he does admit that he was still in love with Summer all along. That happened after Lola recognized the truth. So, Y&R wrote Calle’s character as the person who pushed Kola to its end, rather than having a cheating scenario facilitate Skyle’s reboot. That choice could have been loathed by many viewers.

Young And The Restless Spoilers – Looking At Shared Future

Lola is out of the picture, having seemingly moved back to Miami, Florida. Theo Vanderway (Tyler Johnson) wasn’t the one for Summer. As was true with the Kola breakup, Tola stopped because Theo ended it. That left Summer as the person who was dumped and alone.

Y&R has skillfully written Skyle back together. With whatever they were in the past, Summer and Kyle are legitimately together now. So, the question of whether it’s realistic to keep them together later this summer can honestly be answered with a yes.