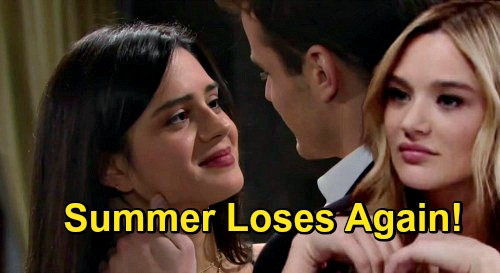 The Young and the Restless spoilers document that Lola Rosales (Sasha Calle) hasn’t been able to get Kyle Abbott (Michael Mealor) out of her system. That’s due to the depth of her feelings and her ex-husband’s continued presence in Lola’s current life.

Meanwhile, Summer Newman (Hunter King) thinks she’s the one who has doubts about Kyle. Truth be told, her actions have reopened Kyle’s uncertainty about the woman he believes he loves like no other.

Young And The Restless Spoilers – Summer Driving Back To Town

Summer was gone from Genoa City, Wisconsin, for a period of time during the later part of the last decade. Y&R fans know that King’s planned departure happened because she was also part of the cast of the nighttime situation comedy, Life in Pieces.

She later returned to her television home, with King’s Y&R character being revamped.

A devolution, as compared to an evolution, happened. At least that’s how Kyle thought of it when he openly stated that he didn’t want anything to do with Summer, who’d become insufferably self-absorbed.

Summer’s wild ride back to GC, in a former boyfriend’s stolen sports car, was followed by intense pressure that was applied to Kyle.

Their eventual marriage wasn’t based on love, but happened as a result of Summer’s willingness to trade half of her liver, which Lola desperately needed, in return for Skyle’s first marriage.

Young And The Restless Spoilers – Skyle Sequel In Jeopardy?

It feels like Y&R’s writing staff split Kola in order to create a revived Skyle relationship that endures, or Kola actually isn’t all the way over and maybe never was. The audience, like Kyle, doesn’t know which direction this storyline will take because Summer is understandably unwilling to commit to Kyle until she feels secure.

This time around Summer isn’t acting in a totally selfish manner and her test of Kyle is generally understandable, base on his history with Lola.

Summer should have handled her exit from the business trip in a different manner, simply told Kyle that she wasn’t ready to get married yet, and went back to GC with him. He likely would have said okay and been patient.

However, Summer’s decision to pay a Society waiter to spy on Kyle may put Skyle in jeopardy if Mealor’s character learns what she’s done.

Kyle was calling the shots in the recent past when he acknowledged that yes, he was still in love with Summer. His response to Lola’s ultimatum broke her heart, but also busted the tension between the then married couple.

It’s become possible that Kyle will conclude Summer hasn’t matured and isn’t someone he can trust. If so, the chances are that Lola wouldn’t become his rebound. Instead, Kyle would be someone who Lola allows back into her life, if that happens, with a Kola sequel starting from a different relationship entry point.