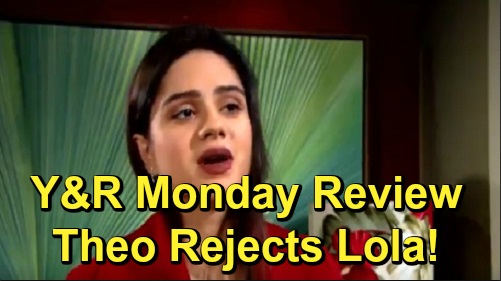 The Young and the Restless spoilers review for Monday, February 10, tease that Kyle Abbott (Michael Mealor) and Summer Newman (Hunter King) will wake up together in Kyle’s room at the Grand Phoenix. They’ll be happy together, even though they know this is complicated. They’ll decide to keep their pairing to themselves for now, and to figure the rest out later.

Later, the two will arrive for work at Jabot, but they won’t walk in together. Theo Vanderway (Tyler Johnson) will notice Summer walking in shortly before Kyle, and he’ll needle her about that as they talk in the hallway. He’ll realize that Kyle and Summer spent the night together and get in a couple digs about it, while Summer tells him to stay away from Lola Abbott (Sasha Calle).

Meanwhile, in the CEO office, Jack Abbott (Peter Bergman) will ask Kyle to tell him what’s happened, and Kyle will spill the whole story. He’ll tell his dad that the fault for everything lies on him, and that he can’t blame Theo for any of it. He’ll explain how throughout his relationship with Lola, he refused to listen to the little voice in his head about Summer. Jack will be horrified by this, and as he continues to listen to Kyle’s story, he’ll realize that the marriage is beyond repair.

Kyle will explain that he wanted so badly to be the man that Lola thought she saw, but that deep down something was always holding him back. He’ll sadly recount how he wanted to be the hero for Lola, and that he was almost addicted to that feeling, but once they settled into a routine, it all became clear. Jack will advise Kyle not to jump into anything new, and Kyle will say that he just wants to find a way to move forward without causing more agony.

Later, at Society, Rey Rosales (Jordi Vilasuso) will stop by to check on Lola at the insistence of Celeste Rosales (Eva LaRue), who will have talked with Lola earlier by phone. Lola just won’t be able to hold it together as Rey asks her if everything’s ok, and she’ll fall into his arms sobbing. She’ll tell him the whole story, and Rey will be outraged with Kyle’s behavior, but he’ll tune down his anger to support her.

After Rey leaves, Theo will arrive and immediately and “accidentally” spill the information about Kyle and Summer being together for the night. Lola will fume as she chops vegetables, then suddenly she’ll push Theo up against the freezer and kiss him passionately. She’ll want them to get out of there, but Theo will say no, that she’d regret it. She’ll sigh and agree, then walk away as Theo bangs his head against the freezer.

Meanwhile, on the new episode of Y&R on Monday, February 10, Sharon Newman (Sharon Case) will prepare for her first chemo session at the hospital. Rey and Mariah Copeland (Camryn Grimes) will rally around her, and once they get to the hospital, Sharon will have to wait on her blood work to come back. She’ll tell Rey that he doesn’t have to stay, and he’ll surprise her by saying that he’s got a lighter load at work.

Sharon won’t like that at first, but Rey will insist that his place is with her, and that it’s his choice where he wants to spend his time. She’ll soften a bit, then Rey will leave, and Sharon will get started with the chemo with Mariah at her side. Sharon will look at the infusion pump tentatively a few times, clearly affected by the experience.

Afterwards, Sharon, Mariah, and Rey will head to Crimson Lights, where Sharon will feel fine and want to get back to work. Rey and Mariah will hover too much, and Sharon will tell them to chill out. They’ll then sit down, and Sharon will express how scary and unsettling the experience was, but she’ll say that she’s feeling no side effects, and they’ll decide to get lunch…including brownies and ice cream, which Sharon will to enjoy every minute of.