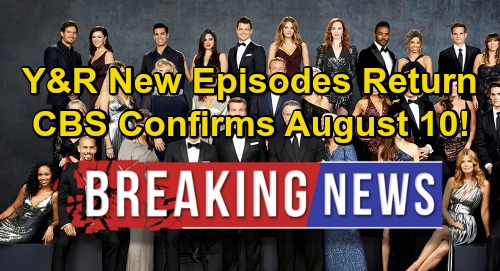 The Young and the Restless spoilers tease that fans have something to be happy about. New Y&R episodes are on the way, which is something fans have been clamoring for. The show has been shut down for months due to the coronavirus pandemic, and there’s been a lot of fan inquiries lately about exactly when we can expect new episodes – well, Eric Braeden (Victor Newman) and CBS have answered the question!

New Y&R episodes will begin on Monday, August 10, and the first indication came when Eric Braeden responded to a fan tweet asking when new episodes would air.

Eric responded by saying, “I think in second week of August…I think, don’t quote me though.” Eric included three LOL emojis with the tweet, apparently knowing full well that he’d be quoted right and left about this tremendously important issue. 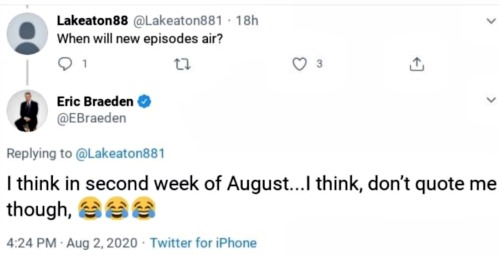 Then, this morning, CBS announced on its website that Y&R would return with all-new episodes on Monday, August 10 in its regular time slot.

According to the writeup on the site, things will get right back to where the action left off on new The Young and the Restless episodes, with Victor and Nikki Newman’s (Melody Thomas Scott) family threatened by a secret – this would be the secret of Adam Newman’s (Mark Grossman) responsibility for a man’s death when he was younger.

Finally, there will be ongoing drama with Sharon Newman (Sharon Case) and her cancer battle, as she faces surgery and a whole new world ahead.

This is great news for Y&R fans, who have been steadily replying with enthusiastic comments on social media since CBS made its official announcement about the show’s return on Monday, August 10. One person tweeted: “Great news! Missed Y&R!” And someone else replied: “So happy my show’s gonna start airing new episodes! #YR.”

It’s certainly great news for fans, and we can’t wait to see the new episodes back on our screens! Stay tuned to the CBS soap and don’t forget to check CDL frequently so you don’t miss any of the latest Young and the Restless spoilers and news.

Mark your calendars 🗓 You do not want to miss all-new episodes of #YR returning to @CBS and @CBSAllAccess on Monday, August 10th! #YReturns pic.twitter.com/Gm5Ua4Svg9