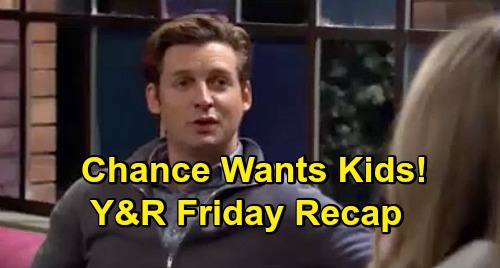 The Young and the Restless spoilers recap for Friday, September 25, tease that Chelsea Lawson (Melissa Claire Egan) and Adam Newman (Mark Grossman) will chat in their living room as Connor Newman (Judah Mackey) is upstairs packing for boarding school.

Adam will get a text from Chance Chancellor (Donny Boaz) asking him to meet. Meanwhile, over at the Grand Phoenix, Abby Newman (Melissa Ordway) will tell Chance that she’s going to talk with Victoria Newman (Amelia Heinle) about exactly what Victoria’s got planned.

Mariah and Faith will have a nice talk, and Mariah will reassure Faith about her concerns, saying that they can call the doctor together and ask all the questions that Faith has about Sharon’s surgery.

At Sharon’s place, Rey Rosales (Jordi Vilasuso) will take care of Sharon as she prepares for her upcoming surgery. Rey will pamper Sharon and pick up groceries for her, bringing her flowers in the process.

Sharon will try to apologize again for the situation with Adam, but Rey will say that it’s not necessary, and they’ll settle in to watch TV for the evening. Later, Faith and Mariah will join them, and they’ll spend a nice evening together.

Over at Newman Enterprises, Victoria will talk via phone with Billy Abbott (Jason Thompson), and Nikki Newman (Melody Thomas Scott) will walk in and overhear Victoria say something about a reckoning coming.

Nikki will ask what Victoria and Billy are scheming about, and eventually Victoria will say that it involves Adam and consequences. Nikki will be upset, and Victoria will leave abruptly.

At Society, Adam will show up to meet with Chance and he’ll apologize for being too abrupt during their last conversation at the motel.

The topic of Alyssa Montalvo (Maria DiDomenico) will come up, and Adam will say that he hasn’t harmed her in any way – rather, he planted a false lead in Arizona to preoccupy her while he convinced the widow in Las Vegas to keep quiet.

Abby will try to scope out what Victoria has planned, but Victoria won’t give up any information, but she will indicate to Abby that something’s coming when it comes to Adam, and that Chance could get hurt.

Abby will get frustrated and walk away from Victoria, just as Chelsea walks in. Victoria will needle Chelsea, saying that she shouldn’t have Connor anywhere near Adam right now.

Meanwhile, back at Adam and Chance’s table, Chance will say that if anything happens to Alyssa, he’ll come forward with the truth. Adam and Chelsea will leave, and Victoria will tell Chance that he doesn’t want any part of what’s coming.

Abby and Chance will confer, and after talking about Victoria’s veiled threats, Chance will mention that he’s been thinking about settling down with a job and maybe kids someday. Abby will be flabbergasted, and Chance will say that it’s not something he wants now…but someday.

At Chancellor Communications, Nikki will arrive to see Lily Winters (Christel Khalil) to fish for information on what Billy and Victoria are planning. Lily will say that she’s been out of town and that she has some catching up to do.

Nikki will press for details, but Lily won’t reveal anything, and then Nikki will basically threaten that if her family gets hurt, Victor Newman (Eric Braden) will strike back with everything he’s got. Lily won’t be rattled, but later she’ll call Billy and tell him that they need to have a serious talk.

Finally, back at Adam’s penthouse, he and Chelsea will return home. Chelsea will be upset from her conversation at Society with Victoria. Adam will lament that he’s done everything that he can, but that there are elements of this that are out of his control.

Adam will tell Chelsea that it might be time to make the call he doesn’t want to make.

Friday’s episode of Y&R sounds terrific, so stay tuned! We’ll be sure to give you updates as Y&R news comes in. Stick with the CBS soap and don’t forget to keep CDL at the ready for all the latest Young and the Restless spoilers, updates, and news.