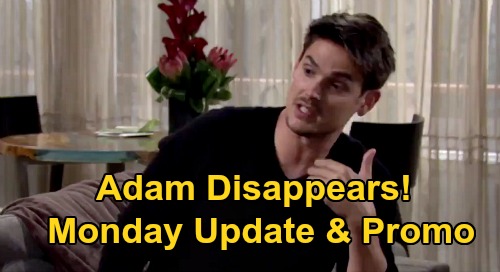 The Young and the Restless spoilers recap for Monday, August 24, tease that Nate Hastings (Sean Dominic) and Amanda Sinclair (Mishael Morgan) will start their day together at Society with a nice breakfast, while Devon Hamilton (Bryton James) and Elena Dawson (Brytni Sarpy) canoodle at the New Hope Clinic before their days begin. Soon, Nate will show up for work at the clinic, as Devon heads over to Society where he’ll find Amanda.

Devon and Amanda will have a nice conversation together, with Devon saying how much Katherine Chancellor (Jeanne Cooper) would have appreciated Amanda’s tenacity.

Amanda and Devon will delve into the topic of Devon’s loss of Neil Winters (Kristoff St. John), which will lead into a discussion about Hilary Hamilton (Mishael Morgan). Even though the subject will be a little awkward, Devon and Amanda will muddle through it just fine.

Meanwhile, at the penthouse, Chelsea Lawson (Melissa Claire Egan) will arrive as Adam Newman (Mark Grossman) is waking up from a slumber. Adam will be feeling frustrated about his repressed memories, but Chelsea will say that this is something that probably just can’t be rushed.

Adam will fall back asleep, but soon some memories will start to return, and Adam will leap up and tell Chelsea that he’s got to get over to see Sharon Newman (Sharon Case) right away.

At Sharon’s place, she’ll be having a relaxing morning with Rey Rosales (Jordi Vilasuso). Sharon will agree to take things easy today and spend the day on the couch, even though she’ll be anxious to continue on with her sessions with Adam.

After Rey goes, Adam will barge in with the news that some memories are returning. Adam will be worked up, and Sharon will get him calmed down so she can figure out what’s going on.

Adam and Sharon will walk through what happened with Adam’s memories returning earlier, and Adam will say that he recalls AJ Montalvo threatening Hope Wilson (Signy Coleman) and hiding under a table while this is going on.

Adam will get agitated as he remembers confronting AJ and lashing out. Adam will then race out of Sharon’s place.

After some bickering, Billy will take off. Later, Chelsea will meet up with Rey to share her concerns about Adam and Sharon working together.

Rey will insist that Sharon’s decision to provide therapy for Adam doesn’t bother him, and that he supports Sharon’s professional and personal choices. But still, Rey will be unnerved when Chelsea reveals that Adam and Sharon are together right now working on Adam’s memories.

Later, Victoria will be in her office at Newman Enterprises when Billy calls with an emergency. Turns out, Katie will have just been stung by a bee and will be having a severe allergic reaction.

Victoria will take off right away, ending up at the New Hope Clinic where Billy took Katie for evaluation. Katie will end up being fine, but Billy will be quite upset over having witnessed Katie struggling to breathe.

After Victoria, Billy, and Katie take off, Elena and Nate will regroup, and Elena will compliment Nate for his great work.

Finally, Rey will return to Sharon’s place, where Sharon will be fretting about Adam and what happened earlier. Rey will think that Sharon might be too close to this situation, and that perhaps the best thing to do is to let Chelsea care for Adam.

Soon, Chelsea will arrive, and she’ll learn that Adam is missing, but Sharon won’t be able to give Chelsea details, which will irritate Chelsea. Chelsea will take off looking for Adam.

It sounds like a lot of Y&R drama is heating up for Monday’s episode, so stay tuned! Remember, CDL is your go-to place for all the latest Y&R spoilers, news, and updates, so be sure to check back with us often!

Next week on #YR, Adam’s memories of the past start to return, Summer and Kyle discuss their future, and Phyllis launches her latest endeavor. pic.twitter.com/fPCizQMXkS