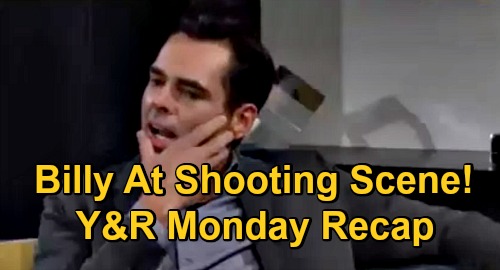 The Young and the Restless spoilers recap for Monday, December 7, tease that Victoria Newman (Amelia Heinle) will get a message from Victor Newman (Eric Braeden) saying that Billy Abbott (Jason Thompson) has been arrested. Victoria will rush out of Newman Enterprises.

Meanwhile, over at Crimson Lights, Rey Rosales (Jordi Vilasuso) will meet with Michael Baldwin (Christian LeBlanc) on the patio. Rey and Michael will discuss an eyewitness who can place Billy at the scene of the shooting – an eyewitness who’s in a secure location that few people know about.

Michael will rant that he doesn’t like this case, and Rey will have the feeling that something’s off.

Elsewhere in the coffeehouse, Sharon Newman (Sharon Case) and Faith Newman (Alyvia Alyn Lind) talk about school for a bit, then Faith will get a series of taunting texts from her friends about Adam Newman (Mark Grossman) being committed.

Faith will ask Sharon about it, and she’ll be angry that Sharon didn’t tell her about the commitment. Faith will angrily rant about Adam being evil and about his misdeeds, worrying Sharon.

Over at Chancellor Communications, Jill Abbott (Jess Walton) will talk with Amanda Sinclair (Mishael Morgan) and Lily Winters (Christel Khalil). It will be established that Billy is still in jail and that Amanda is headed over to the station to get him released.

Amanda will share about the secret eyewitness, and Jill will opine that someone’s got a vendetta against Billy.

Amanda will want to get a timeline of Billy’s whereabouts at the time of the shooting, and Jill will scoff and leave to go to the station for some answers.

Amanda will establish with Lily’s help that Billy was alone in the Chancellor Communications building for enough time to have left, committed the crime, and returned to the office, but Lily will insist that Billy is innocent. Victoria will enter and say that Lily’s right.

Amanda will leave to get Billy out of jail, and Victoria will mention that Amanda had defended Billy before. That will be news to Lily, who will learn from Victoria that Billy and Lily had an affair and that Victor had proof of it. Lily will question whether that proof really exists.

At Adam’s penthouse, Chelsea Lawson (Melissa Claire Egan) and Adam will be back from the ER where tests were done on Chelsea after she fainted. Adam and Chelsea will still be waiting for the results.

Rey will drop by to say that Billy was arrested, which will make Adam and Chelsea happy. After Rey goes, Chelsea will want to leave town pronto, but Adam will say that he wants to get her test results back first.

When Adam goes upstairs to pack, Chelsea will do some quick internet research on fainting, and she’ll leave Chloe Mitchell (Elizabeth Hendrickson) a voicemail message.

When Adam returns, Chelsea will pretend that she was on the phone with the doctor and she has a harmless condition called syncope. Adam will say that’s great news and that they’ll leave town tonight.

Sharon will say that if that’s true, then the real shooter is still out there.

From across the coffeehouse, Faith will get a text from Jordan (Madison Thompson) asking if they’re on for later. Faith will make excuses about her mom hovering and watching everything, and Jordan will tease Faith and ask her to make something up. Faith will refuse.

At Society, Jill will meet with Lily fresh back from the police station where Paul Williams (Doug Davidson) wouldn’t even hear her out.

Jill will be worried about a possible conviction, and she’ll ask Lily to help her convince Billy to get on the company jet and flee to Samoa, where there’s no extradition. Lily will talk Jill down.

Back at Chancellor Communications, Billy and Amanda will return from the police station, and Amanda will sit Billy down for a talk. Amanda will say that Billy is on record saying that he was in the building at the time of the shooting, yet there’s an eyewitness.

Billy won’t be able to explain it, and Amanda will gripe that Billy needs to start taking this seriously.

Amanda will finally get the truth out of Billy – that he did leave the building that day and he lied to the police about it. Billy will say that he got a tip that Chelsea disappeared, and so he followed Adam to the building where the shooting occurred.

Billy will say that he saw Chelsea exiting the building and walking away, so he left and that he wasn’t there at the time of the shooting.

Monday’s episode of Y&R sounds terrific, so be sure to tune in! Stick with the CBS soap and don’t forget to check CDL regularly for the latest Young and the Restless spoilers, updates, and news. We’ve got you covered!

Next week on #YR, Jill asks Lily for help, the Abbotts make a decision about Theo’s lawsuit, and Victoria makes some changes! pic.twitter.com/m2tRNenDgX