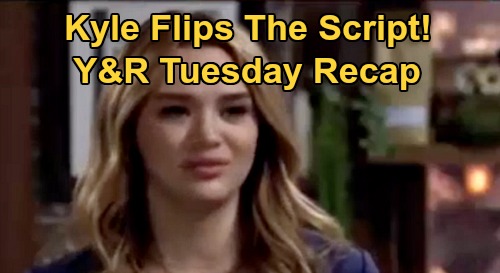 The Young and the Restless spoilers recap for Wednesday, October 28, tease that Abby Newman (Melissa Ordway) will dream about Chance Chancellor (Donny Boaz) shirtless and in uniform, then she’ll wake up as Chance is getting ready for his meeting with Paul Williams (Doug Davidson).

Abby will be sure that Chance will get the detective position on the GCPD, and Chance will be hopeful.

Meanwhile, over at Crimson Lights, Elena Dawson (Brytni Sarpy) will sipping coffee when she daydreams that Devon Hamilton (Bryton James) comes in and tells her that he wants her back. Elena will snap out of it when Mariah Copeland (Camryn Grimes) comes along.

Elena will ask Mariah for advice, and they’ll go back to Elena’s apartment, where Elena will tell Mariah the story of what happened with Nate Hastings (Sean Dominic).

Mariah will think that Devon must be spinning out, and Elena will ask Mariah to be there for him. Elena will wonder whether she should beg Devon for forgiveness the way that Mariah begged Tessa Porter (Cait Fairbanks) for forgiveness.

Mariah will think that it’s different, since Elena cheated with Devon’s cousin.

Mariah will head back to Crimson Lights, where she’ll encounter Abby, who will be all excited about the prospect of Chance getting a job with the GCPD. Mariah will mention how detectives’ work can be all consuming and Abby will end up having a daydream about not knowing where Chance is and worrying about him.

A short time later, Chance will meet with Paul at Crimson Lights, and Paul will happily offer Chance a detective position with a probationary period. Chance will happily accept, and he’ll start immediately.

At Devon’s penthouse, Amanda Sinclair (Mishael Morgan) will drop by and talk will turn to what Amanda’s private investigator found. Amanda will report that no one in her mother Rose’s apartment building remembers seeing Rose pregnant, then out of the blue she showed up with a baby.

Devon and Amanda will theorize that Rose might not be Amanda’s birth mother.

In Chancellor Park, Elena will be out on a run and she’ll see Nate, but she’ll run off after envisioning Nate saying that what happened between them wasn’t a mistake, and that she felt it, too. Nate will see Elena and call after her, but Elena will go running off.

At Jabot, Summer Newman (Hunter King) will be working and she’ll daydream about working happily with Kyle Abbott (Michael Mealor) and being very much in love.

Jack Abbott (Peter Bergman) will snap Summer out of the daydream, and Summer will offer to resign from her position if Jack would like. Jack won’t accept that, and he’ll tell Summer how much he cares about her.

Jack will think that Summer and Kyle can be professional around the office, and he’ll note that he’s got more faith in them as a couple than she does right now. Jack will urge Summer to face her fears.

Over at Society, Kyle will be working remotely when Lola Rosales (Sasha Calle) spots him. As they’re talking, Lola will reveal that Summer confronted her a few days ago at Crimson Lights.

Later, Abby will imagine a terrible scenario involving Adam Newman (Mark Grossman) rigging the restaurant with bombs and fighting with Chance over a knife.

Abby will then head to Chancellor Park, where she’ll have a picnic set up for her and Chance. Abby will nearly send Chance a text asking him if he’s sure about his detective job, but she’ll delete it as Chance walks up.

At the New Hope Clinic, Elena will walk into the exam room where she and Nate slept together. She’ll imagine Nate walking in and telling her that she knows what she wants and to just admit it. Elena will snap out of it, saying that it’s not Nate that she wants.

Elena will head to Crimson Lights where she’ll see Amanda. Elena won’t want to talk to Amanda, but Amanda will want to apologize for her part in blowing up Elena and Devon’s lives.

Elena will take the blame for what she did, and she’ll tell Amanda that she’s going to fight for Devon. Amanda will think that Elena doesn’t know for a second what she wants.

Back at Jabot, Kyle will arrive and talk with Jack, who will relay that Summer wanted to resign. Kyle will say that’s not necessary and that they can put Jabot first and get along fine.

Jack will think that Kyle should fight for Summer, but Kyle will rant that he’s tried everything, and he feels that he’s fighting a losing battle.

At Crimson Lights, Summer will see Mariah, who will call her the “runaway bride” and an entitled brat who only wanted Kyle when Lola had him. Summer will leave upset and bump into Kyle on her way out.

Kyle will immediately notice that something’s wrong with Summer, and Summer will say that her mind is swirling and that she wants to believe in them but that she has doubts.

Kyle will wish that Summer had talked to him immediately about her doubts, so that they could have talked through it right away. Kyle will say that their history is weighing on him too, and that he doesn’t know if he can be rejected by her again.

Wednesday’s episode of Y&R is going to be terrific, so be sure to tune in! We’ll give you updates as Y&R news comes in. Stick with the CBS soap and don’t forget to check CDL often for the latest Young and the Restless spoilers, updates, and news. We’ve got you covered!