The Young and the Restless Spoilers: Rey In Grave Danger – How Far Will Adam Go To Get Sharon? 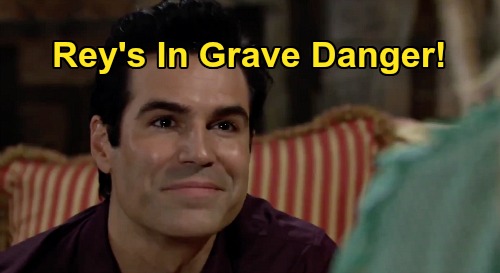 The Young and the Restless spoilers tease that Adam Newman (Mark Grossman) seems to be spiraling out of control. As Y&R viewers know, Adam has been a mess ever since the big exposé about him was published by Chancellor Communications.

Adam and Chelsea Lawson (Melissa Claire Egan) have been at odds as of late, and Connor Newman (Judah Mackey) is off at boarding school. Things just aren’t copacetic in Adam’s world, and he’s been spiraling.

Well, as Adam tends to do when he’s spiraling, he turned once again to Sharon Newman (Sharon Case). Feeling estranged and unsupported from Chelsea, Adam professed his love to Sharon and basically suggested that they get together again.

Sharon didn’t go for it, and the whole situation prompted her to go ask Rey Rosales (Jordi Vilsauso) to propose to her.

According to The Young and the Restless spoilers, Adam will be deeply hurt to know that Sharon has turned away from him and to Rey, and Adam will even hire an investigator to follow Rey and track his movements.

So, what’s Adam going to hope to gain by having Rey followed? If he’s looking for dirt on Rey, he’s not going to find anything, since Rey has a squeaky-clean record.

Unless there’s some deep, dark secret about Rey that nobody ever knew about, Adam’s really only going to learn that Rey’s a stand-up guy who goes to work every day and takes good care of Sharon.

But maybe digging for dirt isn’t what Adam has in mind for Rey. Perhaps Adam has it in mind to track Rey because he wants to know his habits…so he can possibly take him out if he wants to.

Rey could wind up in danger is Adam is thinking about eliminating the competition from Sharon’s life. Or maybe violence isn’t what Adam has in mind. Adam could consider setting up Rey and trying to destroy his life or his career on the GCPD out of revenge.

Whatever the case, it sure looks like Adam is on a mission to get Sharon for himself, or at least to keep her from getting married to Rey. It could be a “no one can have her if I can’t” sort of situation with Adam.

Or maybe Adam really doesn’t know what he’s thinking at this point. It’s kind of hard to imagine him walking out on his life with Chelsea and Connor after they all worked so hard to be together.

At any rate, it definitely looks like Adam is going to go after Rey, but just how far will he be willing to go to keep Rey and Sharon from tying the knot? We’ll see what Adam’s next move is, but we suspect that he’s got a sinister plan in mind!

Stay tuned to the CBS soap and don’t forget to check CDL frequently so you don’t miss any of the latest Young and the Restless spoilers, updates, and news.