BY Heather Hughes on May 13, 2020 | Comments: Leave Comments
Related : Soap Opera, Spoiler, Television, The Young and the Restless 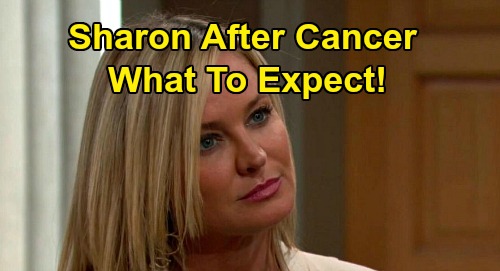 The Young and the Restless (Y&R) spoilers reveal that many fans are wondering what’s next for Sharon Newman (Sharon Case). Sharon’s cancer storyline was originally set to run far longer, but Y&R may tweak that plan due to the COVID-19 aka coronavirus crisis. There’s no confirmation on when the cast and crew can get back in the studio, but it’s easy to imagine some story adjustments by then.

After all, Case has plenty of Daytime Emmy reel material at this point. The show’s already played most of the fearful beats with Sharon and lots of supportive family moments. Since this shutdown brought the drama to a halt and forced Y&R to lose momentum, it’s probably best to move things along once they can.

When The Young and the Restless returns with new episodes, Sharon’s surgery will hopefully be revealed as successful. After all the real-life pandemic drama, most Y&R viewers won’t be down for more doom and gloom. It’d be nice to see Sharon’s recovery move forward as soon as possible.

If Y&R chooses to skip ahead a bit in their stories once production resumes, that’s even better. Breast cancer awareness is certainly important, but The Young and the Restless got the job done. They highlighted early detection and showed Sharon going through the typical emotions of this diagnosis.

Now it’s time for Sharon to get back to normal – or at least find a new normal after this battle. It’d be great to see Sharon stronger than ever and ready to seize the day. After fearing she might lose her life, Sharon may be eager to take advantage of all life has to offer.

So what happens after Sharon’s officially on the road to recovery? Sharon may finally get back to her career and focus on helping others. Since Sharon got so much help during her cancer battle, she may be even more eager to give back.

Sharon’s had some therapy sessions with Connor Newman (Judah Mackey) and Victoria Newman (Amelia Heinle), but there’ll be other characters she can advise down the road. Adam Newman (Mark Grossman) might need some assistance as he ultimately deals with his childhood trauma.

Regardless, Sharon can concentrate on other people’s problems for a change, which should be a welcome relief. Of course, Sharon can’t forget about her personal life! At some point, Rey Rosales (Jordi Vilasuso) may pop the question. Once Sharon feels secure and settled again, it’d make sense for Rey to ask Sharon to marry him.

That could naturally bring lots of wedding planning and something uplifting to focus on. Sharon deserves the opportunity to have some fun and be pretty carefree for a while. She can enjoy her family without all this cancer pressure and the worry of not pulling through.

Naturally, more drama should hit for Sharon sooner or later. That could come in the form of a rocky romance or something else, but this happy post-cancer period is crucial in the meantime. Sharon’s suffering needs to end for a while! This Y&R character’s really been through the emotional wringer and is long overdue for some peace.