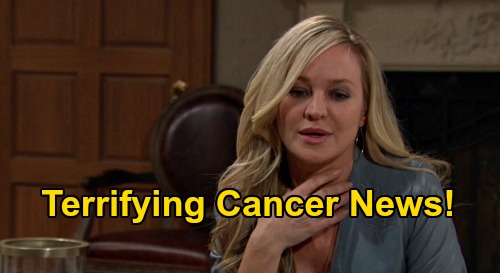 The Young and the Restless spoilers tease that Sharon Newman (Sharon Case) will soon face some tough moments. As Y&R viewers know, Sharon had a setback when she couldn’t receive one of her chemotherapy treatments a while back. Her white blood count was too low for her to receive the powerful chemo drugs, and the whole thing really worried Sharon.

Of course, in the grand scheme of things, skipping and rescheduling one chemo session probably won’t make much difference in Sharon’s ultimate prognosis, but it’s understandable that she would panic at the thought of missing a session.

Many cancer patients experience a strong “fighting spirit” and see themselves as warriors who want to fight the cancer with everything they’ve got.

And to have some of your “fight” taken from you, even for a week when you miss a chemo session, can be a big blow. It was great to see Sharon react so authentically to the prospect of her chemo sessions being put on hold. Sharon expressed the terror and panic of not being able to be treated in a very real, relatable way.

According to the Young and the Restless spoilers, Sharon will soon approach a milestone in her treatment. She’ll have a scan done in order to determine whether the chemo is working. As Y&R viewers will remember, Sharon’s course of treatment is to undergo chemo to shrink the tumor, then have surgery to remove the tumor and the surrounding tissue.

Sharon will prepare for her doctor’s appointment to learn the news, and she’ll have a surprising perspective on the visit. According to Y&R spoilers, Sharon will want to go get the results of her scan on her own, without Rey Rosales (Jordi Vilasuso) or Mariah Copeland (Camryn Grimes) in tow.

Mariah will have returned home from the tour with Tessa Porter (Cait Fairbanks) in order to support Faith Newman (Alyvia Alyn Lind), and she’ll want to go with her mom to her appointment.

We’ll see if Sharon changes her mind and ultimately decides to let her family support her during her visit. From Sharon’s perspective, she may want to protect herself from the looks of pity or even from her loved ones’ grief responses if the news isn’t good. And again, it’s great to see Sharon reacting in such an authentic way on the show.

It will be interesting to see where else Sharon’s cancer journey will take her, and in turn take viewers. One wonders whether Sharon will end up losing her hair as a result of the chemo. Now would be about the right time for Sharon to notice the beginnings of har loss, and that can be an extremely difficult part of treatment for patients. We’ll see if we get to see Sharon deal with that struggle.

We look forward to seeing more of Sharon Case’s performance in the role of a fearful yet braver-than-she-thinks cancer patient. What do you think about Sharon’s cancer story on Y&R? Stay tuned to the CBS soap and remember that CDL is your go-to source for all your soap news. We’ll keep you current on all of the latest Young and the Restless spoilers, updates, and recaps.