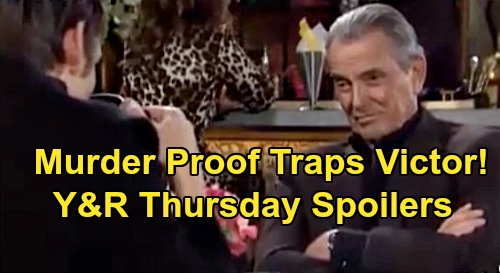 The Young and the Restless (Y&R) spoilers for Thursday, April 2, tease that Victoria Newman (Amelia Heinle) will have a new outlook. After truly putting Billy Abbott (Jason Thompson) in the rearview mirror, Victoria will feel more like herself. She’ll regain her sense of purpose as she lets go of all her trauma.

As a result, Victoria will decide she’s ready to head back to work. Once Nick Newman (Joshua Morrow) gets updates, he may wonder if Victoria’s sure about this. However, Victoria will insist she’s prepared and did what she needed to do. She’ll feel like she’s found closure and healing, so Nick will be convinced.

Y&R spoilers say Nick will give the Newman throne back to Victoria and promise to help if she needs him. Nick didn’t want to stay in the corporate game permanently anyway, so he’ll be happy to get back to his old life. Of course, Adam Newman (Mark Grossman) will have other plans – and he’ll put them in motion through a crucial meeting.

Once Victor Newman’s (Eric Braeden) summoned to Society, Adam will drop hints about how they’re just alike. He’ll think he’s his father’s son and will prove it with a blackmail plot. Adam will present the evidence Alyssa Montalvo (Maria DiDomenico) offered and insist it’s all right there: Victor murdered AJ Montalvo.

The Young and the Restless spoilers say Adam will bring up the way Victor yanked him around on the CEO issue. Adam will insist Victor’s going to make it right by giving him the position – unless Victor would prefer to land behind bars!

Deep down, Adam will think Victor approves of this move. He’ll believe Victor likes when his son can outsmart him and back Vic into a corner. Adam’s in for a rude awakening when Victor retaliates down the road, but Victor will indeed feel stuck at the moment.

Other Young and the Restless spoilers say Nikki Newman (Melody Thomas Scott) will make an upsetting discovery. After Nikki notices how Nick and Phyllis Summers (Michelle Stafford) are looking at each other, she’ll suspect they’re back together. Nikki will call Nick out on this terrible idea in Thursday’s episode. She’ll feel confident that Nick’s going to regret it, but he’ll stand by his choice.

Finally, Y&R fans can expect a rough day for Sharon Newman (Sharon Case). Her scan results will come back, but they won’t be what she wanted to hear. Sadly, the chemotherapy didn’t shrink Sharon’s tumor. That means surgery is Sharon’s best chance at survival, although she won’t know yet whether that means a lumpectomy or a mastectomy.

Once Sharon gets this bad news, she’ll be an emotional wreck. Sharon will wind up smashing things all over the place at Crimson Lights as she processes her anger and devastation.

It’ll be tough for Sharon to cope, but Rey Rosales (Jordi Vilasuso) will support her later. Rey will encourage Sharon to be optimistic and focus on the next step. It’s time to close the door on chemo and figure out what else can be done.