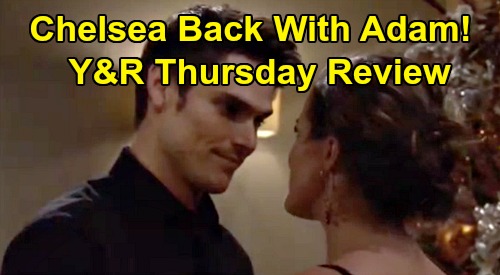 The Young and the Restless spoilers review for Thursday, January 2, tease that the New Year’s Eve party at Society will get underway. Various Genoa City residents will be in attendance, with Nick Newman (Joshua Morrow) and Chelsea Lawson (Melissa Claire Egan) meeting there, and Adam Newman (Mark Grossman) arriving shortly thereafter.

Pretty soon, Phyllis Summers (Michelle Stafford) will arrive and pull Chelsea aside for a chat as Nick, Adam, and Chelsea are awkwardly standing together. Phyllis will snark at Chelsea for stringing Nick along, while at the same time not discouraging Adam. Chelsea will protest, saying that’s not true, but Phyllis will persist, saying that Chelsea has real nerve walking into the party on Nick’s arm like some golden couple.

Summer Newman (Hunter King) will see part of her mom’s conversation with Chelsea and will pull Phyllis aside, asking her to please not start anything with anyone tonight. She’ll then insinuate that Phyllis is interested in her dad, which Phyllis will deny. Phyllis will say she’s not looking to get involved with anyone, while giving Chance Chancellor (Donny Boaz) a sideways glance.

Later, Nick will lament to Jack Abbott (Peter Bergman) that he thinks he’s losing Chelsea. He’ll tell Jack that he thought they had something special, but lately there’s this awkwardness that wasn’t there before, and that he thinks they’re together for the wrong reasons. He’ll worry that Chelsea’s with him because he’s safe and dependable, and that she feels obligated to be with him. Jack will say that only Nick can answer the question of what to do about it.

Nick will then talk with Chelsea privately, and he’ll tell her that he’s glad they got another chance to be together, and that he’s grateful for her, but that it has become clear to him that she should be with Adam. Chelsea will be completely taken aback as Nick says that Adam loves her in his own way, and that they have a connection that’s deeper than just sharing a child together.

Chelsea will protest, saying they can get through this, and that Nick doesn’t get to decide for her who she’s going to be with. But Nick will persist, saying that she needs to be honest with herself, and that she should go have a life with Adam and Connor Newman (Judah Mackey). Chelsea will emotionally thank Nick for everything he’s done for her, and she’ll say that he’s a wonderful man.

Nick and Chelsea will then share a goodbye kiss and hug, which Adam will see from afar and misunderstand. Adam will leave sadly and head back to his penthouse, where he’ll mope by himself. He’ll be stunned when Chelsea walks in and walks up to him, looking at him silently. She’ll tenderly take his hand, and suddenly it will ring midnight and they’ll watch the fireworks out of the window, hand in hand.

While all of this is going on at Society, Billy Abbott (Jason Thompson) and Amanda Sinclair (Mishael Morgan) will be at the little bar outside of Genoa City. Billy will tell Amanda about how he feels he has to live up to this perfect image among his family, and that sometimes it’s nice to just sit with a friend. He’ll say that he feels like he can be himself with her, and she’ll feel the same about him.

Amanda will discuss how she used to be free, back when she was in college before law school, but then she buckled down and started making all the “best” choices. Billy will relate – he’ll know how it feels to do all the right things, waiting for that pat on the back. He’ll note that he’s historically just gotten in line and has done what people wanted him to do, rather than being who he is.

Amanda will understand exactly what Billy is saying, and he’ll joke with her that she’s his new shrink, but Amanda will think that she’s probably not the best person to help him since she doesn’t have everything together herself. She’ll say that this is the only place where she feels that she’s not putting on an act. They’ll be having a comfortable conversation when Billy realizes he has to go. He’ll reluctantly leave, while Amanda stays at the bar to ring in the New Year alone.

Billy will then head to Society where he’ll arrive right at the stroke of midnight. He’ll initially stare at Victoria Newman (Amelia Heinle) unhappily, then he’ll suddenly become “himself” and will embrace her. She’ll be thrilled to see him. They’ll canoodle and ring in the New Year together, like everything is ok.

Finally, on the new episode of Y&R on Thursday, January 2, Sharon Newman (Sharon Case) and Rey Rosales (Jordi Vilasuso) will host their own New Year celebration at Crimson Lights. Tessa Porter (Cait Fairbanks) will sing to the house, with a proud Mariah Copeland (Camryn Grimes) standing by.

Shortly before midnight, Tessa and Mariah will be hanging out when Tessa gets a text. Mariah will wonder who would be texting Tessa a few minutes before midnight, and Tessa will reveal that it was Tanner Watts (Chase Coleman). This will stun Mariah, since Tanner is a platinum recording artist. The text will say that Tanner wants to meet with Tessa, which Mariah will think is amazing. Tessa, however, will look unnerved.