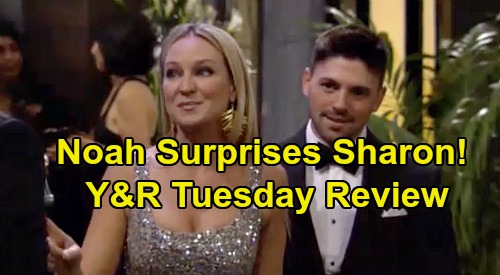 The Young and the Restless spoilers review for Tuesday, February 18, tease that Phyllis Summers (Michelle Stafford) will stun Chelsea Lawson (Melissa Claire Egan) by revealing that there’s a man missing in Las Vegas, and that his wife was told he went into witness protection, but now Adam Newman (Mark Grossman) is paying off the woman.

Phyllis will go on to say that Adam was trying to protect Chance Chancellor (Donny Boaz), and Chelsea will get the picture pretty quickly. Chelsea will ask what Phyllis wants, and Phyllis will say she wants Chelsea’s 25% stake in the Grand Phoenix. Phyllis will say that the clock is ticking, as Chelsea gets a call from Adam, who will be upstairs in a suite he reserved for them.

Chelsea will hightail it up to the suite, where she’ll say that it’s time Adam told her what happened in Las Vegas. Adam will fill her in off-camera, and Chelsea will want to be angry, but she’ll remember how understanding Adam was after the whole Simon Black (Jeffrey Vincent Parise) hostage incident, so she’ll decide to do the same in return.

Adam will tell Chelsea that “it” was an accident and that it happened during a fight. He’ll say that he just wanted to scare the guy off, that the guy would have killed them both, and that afterwards he and Chance did what had to be done. Adam will say that he’ll handle Phyllis, but Chelsea will say that she’ll deal with her, and she’ll promptly call Abby Newman (Melissa Ordway) and ask her to come to their suite.

Abby will quickly learn that Chelsea is sharing her stake of the hotel to Phyllis, which will outrage her at first, but then she’ll realize that Phyllis is blackmailing Chelsea over something. She’ll assume it has to do with Adam, but Chelsea won’t give up the reason why she’s selling her shares. She will, however, tell Abby to be sure to take down Phyllis if she gets the chance.

Abby will head back down to the lobby and blast Phyllis. Chance will be there, and he’ll learn that Chelsea is selling her shares to Phyllis. He’ll start to put two and two together, and after Abby leaves, he’ll ask Phyllis what she did. She’ll say it’s not what she did, it’s what he and Spider did in Las Vegas. Phyllis will gloat that she got what she wanted, and that since she doesn’t do halfway, she’s out for the whole hotel.

Of course, at this point, Chance has to be beside himself. Phyllis has gone after Adam with the information, but she hasn’t even begun to go after Chance. She might decide that she wants to try to get some or all of Abby’s stake in the hotel as well, and that’s bound to be on Chance’s mind right now. It’s a big secret to be keeping from Abby at the start of their relationship, too, and that’s likely weighing on him as well.

Meanwhile, on the new episode of Y&R on Tuesday, February 18, Victor Newman (Eric Braeden) will arrive at the Top of the Tower ahead of the Newman Enterprises 50th anniversary gala. He’ll survey the room and have a moment to himself before Nikki Newman (Melody Thomas Scott) arrives to join him. They’ll share a nice moment together, and he’ll tell her that she’s his rock before they kiss sweetly.

A bit later, guests will arrive. Adam and Chelsea will be there, along with Nick Newman (Joshua Morrow), who will spend a moment with Chelsea needling her about Adam. Sharon Newman (Sharon Case) and Rey Rosales (Jordi Vilasuso) will arrive as well, on the heels of Sharon’s second chemo session. Sharon will head to the ladies’ room where she’ll battle some nausea, when Nikki notices her distress.

Nikki will wonder what’s wrong, and the two ladies will bicker a bit before Nikki asks if Sharon is pregnant. Sharon will openly laugh, saying that she had one of the shrimp appetizers and it didn’t sit well with her. Nikki won’t be amused. Sharon will be back out at the event talking with Rey and Nick when Noah Newman (Robert Adamson) walks in. Sharon will be absolutely delighted.

Phyllis will eventually arrive as an uninvited guest, which will agitate both Chelsea and Abby. And soon Victor’s brother Matt Miller (Robert Parucha) and his first wife Julia Newman (Meg Bennett) will arrive and exchange pleasantries with Victor and Nikki. Once everyone is gathered, Victor will take the microphone and welcome the crowd.

He’ll say that Newman Enterprises isn’t his greatest achievement – his family is, but that Newman is a close second. He’ll acknowledge his retirement and Victoria Newman (Amelia Heinle), who is now running the show. He’ll welcome one and all to the celebration of 50 years of Newman Enterprises and say, “Let the festivities begin!”

There’s certainly a lot of drama on the way for Tuesday’s episode! Stay tuned to Y&R and don’t forget to check back with CDL for all your Young and the Restless spoilers, recaps, and news.