The Young and the Restless Spoilers: Victoria Blames Amanda – Confrontation Over Billy Breakup Gets Wild 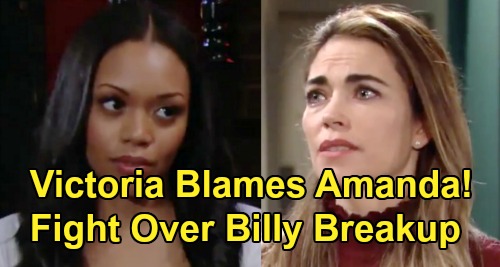 The Young and the Restless spoilers tease that Amanda Sinclair (Mishael Morgan) may soon have a big confrontation on her hands. As Y&R viewers know, Amanda has been spending a considerable amount of time talking with Billy Abbott (Jason Thompson) over the past several weeks. The two got to know each other in the little dive bar outside of Genoa City and they became fast friends.

However, Billy has simultaneously been experiencing problems with his wife, Victoria Newman (Amelia Heinle). Victoria recently found out about Billy’s trips to the dive bar, and Billy finally broke down and admitted that he had stopped seeing his therapist and had been talking with Amanda instead. That infuriated Victoria, who clearly saw it as a betrayal.

That led Victoria to tell Billy in no uncertain terms that he had to get help to “fix” himself, otherwise their relationship was not to going to survive. Well, according to Y&R spoilers for the week of January 27-31, Billy will ultimately be the one who ends his relationship with Victoria. He’ll be feeling smothered around Victoria, who he thinks sees him as “broken.”

Victoria will be devastated and probably quite taken off guard by Billy’s decision to walk out of the relationship. After all, it seemed like she would probably be the one to end things, but it will actually be Billy who packs his bags and leaves her.

And once Victoria is over her initial devastation and shock with the turn of events, in a psychological sense she’s going to need someone to blame.

Chances are, the person who will bear the brunt of Victoria’s blame and rage will be Amanda. According to The Young and the Restless spoilers, the two will encounter each other, and whether that’s an accidental meeting or whether Victoria tracks down Amanda remains to be seen.

But they will soon share the same airspace, and it might not be pretty. After all, Victoria probably perceives Amanda as someone who gave Billy encouragement to act out and explore other aspects of himself.

Victoria might even blame Amanda for Billy’s decision to stop therapy, and she’ll probably be quite angry that Amanda was willing to spend alone time with a clearly married man who was struggling psychologically.

We’ll see how Amanda responds to all of this, but she’s certainly not one to back down from an argument. She’s pretty good at standing her ground, so we could see quite the confrontation between the two women.

It looks like they’ll meet up at the Grand Phoenix, and we’ll see just how intense their discussion gets.

Of course, Amanda will probably express her regret and point out that there was never anything untoward going on between her and Billy – that they were friends and nothing more.

Still, it doesn’t seem like that will be too comforting for Victoria to hear at this point, so she’ll probably give Amanda a piece of her mind.

Or might she do worse? Y&R spoilers say that Amanda’s controlling ex, Ripley Turner (Christian Keyes) will soon be coming to Genoa City. Might Victoria seek revenge on Amanda by getting Ripley back in touch with her and in knowledge of her whereabouts?

That would be a pretty devious move, but it sounds just like something Victoria could do if she was furious enough.

Do you think Victoria will go after Amanda for revenge? Stay tuned to the CBS soap and don’t forget to check CDL often for the latest Young and the Restless spoilers, updates, and news.