BY Heather Hughes on January 14, 2020 | Comments: one comment
Related : Soap Opera, Spoiler, Television, The Young and the Restless 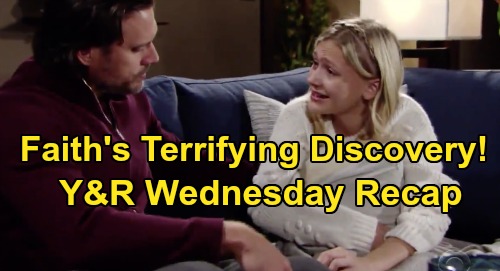 The Young and the Restless (Y&R) spoilers recap for Wednesday, January 15, teases that Sharon Newman (Sharon Case) will make a difficult confession. She’ll come clean to Rey Rosales (Jordi Vilasuso) about finding the lump on her breast during a self-examination on New Year’s Day. Sharon will fill Rey in on the mammogram, ultrasound and biopsy – which confirmed she has a malignant tumor.

Once Rey hears about Sharon’s breast cancer and all the steps she’s taken, her strange behavior lately will make sense. Sharon will tell Rey she doesn’t want anybody else to know before talk turns to her upcoming appointment. She’ll agree to let Rey come along, but she’ll get emotional over what her survival chances might be.

At Crimson Lights, “Chance” Chancellor (Donny Boaz) will get grilled about his connection to Adam Newman (Mark Grossman) back in Vegas. After Nick Newman (Joshua Morrow) brings up the topic, Chance will suggest that they were just in the same place at the same time. He’ll point out that Adam was going by the name Spyder back then and had no clue he was Adam.

Once the conversation shifts to Nick’s concerns about Abby Newman (Melissa Ordway), Chance will promise he has good intentions. He won’t be looking to cause pain for Abby. Nick will eventually steer the conversation to New Hope since their buildings need some security systems. He’ll want Chance to oversee things, so Chance will be on board with that plan.

At the Grand Phoenix, Y&R spoilers say Abby will seem put out with Chelsea Lawson (Melissa Claire Egan). Chelsea will assume this is because she reunited with Adam, but Abby will think Chelsea should just pick a brother, any brother. She’ll insist she doesn’t care before Chelsea eventually shifts gears.

It turns out Connor Newman’s (Judah Mackey) coming over to face his fears about the hotel. Adam will bring in Connor and will reassure the kid along with Chelsea. When Phyllis Summers (Michelle Stafford) appears, she’ll express concern for Connor and prompt Abby to suggest it’s the one thing they can all agree on.

After Chance shows up, he’ll praise Connor for how he handled the crisis and admit he was afraid as well. However, Chance will let Connor know the hotel’s safe now. Chelsea will offer Chance her gratitude for his pep talk while Connor scampers off to the game room with Adam. Next, Phyllis will corner Chelsea to take a few jabs about her Newman brother-swapping.

Back with Chance, he’ll get a warning from Abby. She’ll feel like when it comes to Adam, it’s wise to stay away. The more distance between Chance and Adam, the better off Chance will be in Abby’s eyes. Once Abby walks off to deal with something, Phyllis takes that as her cue to pounce. She needles Chance about how he shouldn’t keep secrets from Abby before flirting and offering to hire him.

Meanwhile, Connor will feel better about Chelsea working at the Grand Phoenix. He’ll be more at ease with the situation, so Chelsea will certainly be glad. At the cottage, Faith Newman (Alyvia Alyn Lind) will sense that something’s up, but she’ll get nowhere with Rey and Sharon. After Faith pushes to find out what’s going on, Sharon will reassure her and leave with Rey.

That’ll leave Faith to discover a paper with the name of Sharon’s oncologist on it. She’ll look worried as she calls Nick back to the ranch. Once Nick makes it over, The Young and the Restless spoilers say he’ll get updates on Faith’s snooping. Nick will wonder why Faith seems so upset, so she’ll reveal a pic she took of the name – which is for a doctor at a breast cancer center.

As for Rey, he’ll let Sharon know he’s going to remain right by Sharon’s side. Across town, Kyle Abbott (Michael Mealor) will talk to Summer Newman (Hunter King) about nailing down their San Francisco trip plans for next week. They’ll opt to discuss the matter at Society, where Theo Vanderway (Tyler Johnson) will be busy trying to stir up some jealousy.

Theo will hug a woman as Lola Abbott (Sasha Calle) looks on suspiciously. The fact that Lola’s watching will please Theo, who’ll later reveal that the woman was an influencer. After Kyle shows up with Summer, he’ll pick up on Lola’s weird vibe over this woman. Kyle will wonder if the idea of Theo being on a date bugged her, but Lola will downplay things and try to keep the peace.

Next, Theo will rile Kyle up over the San Francisco trip. He’ll think Kyle and Summer should hit Portland while they’re in that direction, but Kyle will think Theo just wants him out of the way. After Kyle joins Lola in the kitchen, he’ll push Lola to open her eyes when it comes to Theo. Kyle will be sick of Lola always giving Theo a pass.

Back with Summer, she’ll scold Theo for constantly going too far. Theo will hint that Summer wishes Kyle and Lola were fighting over her instead! The Young and the Restless spoilers say the drama’s about to heat up, so don’t miss all the action. We’ll keep you posted as other Y&R news comes in. Stick with the CBS soap and don’t forget to check CDL often for the latest Young and the Restless spoilers, updates and news.