BY Heather Hughes on January 7, 2020 | Comments: one comment
Related : Soap Opera, Spoiler, Television, The Young and the Restless 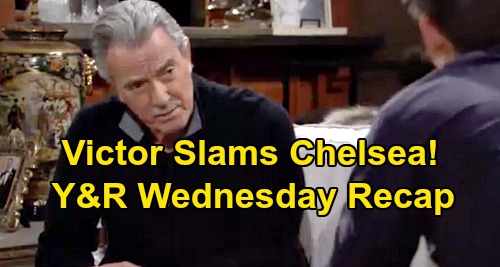 The Young and the Restless (Y&R) spoilers recap for Wednesday, January 8, tease that Kyle Abbott’s (Michael Mealor) birthday fun will continue. At Jabot, Kyle will be surprised with a cake from Lola Abbott (Sasha Calle) and a special gift from Summer Newman (Hunter King). Summer will give Kyle a framed photo of them as kids, which will irk Lola.

Jack Abbott (Peter Bergman) will mention that he scored a hockey autograph for Kyle. Soon after, Theo Vanderway (Tyler Johnson) will waltz in and announce he’s got a gift for Kyle as well. He’ll insist it’s the fantastic social media numbers, so Kyle will be irked. Jack, on the other hand, will think Theo’s delivering great news.

During a private moment with Kyle, Lola will suggest he should let his irritation go – just like she did over Summer’s present. After giving Lola a goodbye kiss, Kyle will head back in the office. Theo will be busy gazing at the photo of Summer and Kyle.

Other Young and the Restless spoilers say Chloe Mitchell (Elizabeth Hendrickson) will think Billy Abbott’s (Jason Thompson) doing well. At the Grand Phoenix, Chloe will gush about Billy being back to the Billy they all know and love. Billy will get lost in his thoughts for a moment as he wonders which Billy he’s supposed to be.

Talk will turn to Chloe and Kevin Fisher’s (Greg Rikaart) baby news. Chloe will tell Billy that Delia Abbott’s (Sophie Pollono) getting a little brother or sister. After Billy offers some congratulatory words, he’ll wonder about Chloe’s secret to happiness.

Chloe will suggest she isn’t always happy. She still cries herself to sleep sometimes, but she’ll be more interested in Billy and how he’s really doing.

Billy won’t offer any details to Chloe, but he’ll hint that he’s working on things. After Chelsea Lawson (Melissa Claire Egan) shows up, Chloe will excuse herself to speak with her.

That’ll leave Billy to consider texting Victoria Newman (Amelia Heinle), but he’ll end up deleting the message and getting in touch with Amanda Sinclair (Mishael Morgan).

Next, Chelsea will express her joy over Chloe’s baby updates. She’ll mention some news of her own and explain that she’s going to give her relationship with Adam Newman (Mark Grossman) another shot.

Chloe will flip out over all the times Adam’s left Chelsea heartbroken. She’ll refuse to believe Adam’s changed and will call him a sociopath.

Chloe will hope Billy can get through to Chelsea, but he’ll insist it’s Chelsea’s life and she gets to live it the way she wants. Afterward, Chloe will lash out at Billy for choosing what she views as the wrong tactic.

At Society, Elena Dawson (Brytni Sarpy) will make a pitch to Devon Hamilton (Bryton James). She’ll think there should be a clinic in the New Hope building for those living there. Devon will think that’s an amazing idea, but Elena will get distracted by a call soon enough.

Abby Newman (Melissa Ordway) will appear, so Devon will tell her about the failed Colin Aktinson (Tristan Rogers) hunt. He’ll also struggle to understand why Amanda’s still hanging around. Abby will point out that Amanda hasn’t given her any trouble at the hotel. She’s been the perfect guest.

The topic will shift back to Colin and Cane Ashby (Daniel Goddard) before Abby brings up “Chance” Chancellor (Donny Boaz). She’ll confess that they’re dating now and add that Chance is opening a security firm there in town.

Soon after, Devon will call Chance to deliver a job offer. He’ll want Chance to keep an eye on Amanda.

Other Y&R spoilers say Adam will head over to the Newman ranch. He’ll talk to Victor Newman (Eric Braeden) about Nick Newman’s (Joshua Morrow) breakup with Chelsea. Victor will point out that Chelsea tends to rebound, but Adam will feel like she chose him a long time ago.

Adam will shift gears and mention Connor Newman (Judah Mackey). He’ll want Connor to have a solid bond with his grandfather, but he won’t want his family to be excluded from any holiday festivities. When Victor starts ranting about Chelsea being a thieving con artist, Adam will put a stop to it.

Even so, Victor will be convinced that Chelsea’s going to follow her typical pattern of behavior. Adam will make it clear that when it comes to his family, he’ll break every rule in the book.

That’s one lesson Adam learned from his old man! The Young and the Restless spoilers say Victor will crack a smile and wish Adam luck.

Back at home, Adam will tell Chelsea about his visit with Victor and how well it went. He’ll think things are looking up, but more drama’s ahead for the “Chadam” family.

We’ll keep you posted as other Y&R details emerge. Stay tuned to the CBS soap and don’t forget to check CDL often for the latest Young and the Restless spoilers, updates and news.