BY Kristine Francis on March 24, 2020 | Comments: Leave Comments
Related : Recap, Television, This Is Us, TV 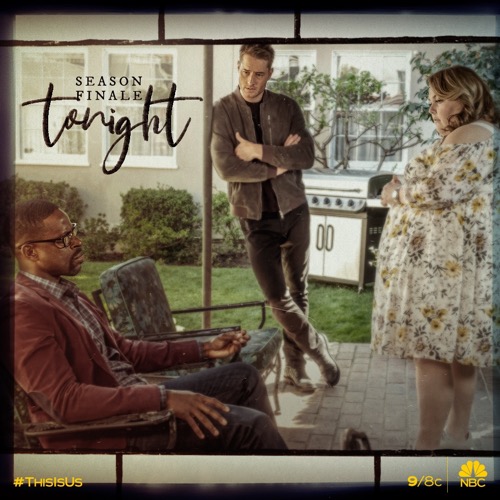 Tonight on NBC their honest & provocative dramedy series This Is Us airs with an all-new Tuesday, March 24, 2020, episode and we have your This Is Us recap below.  On tonight’s This Is Us season 4 episode 18 called, “Strangers: Part Two” as per the NBC synopsis, “The Pearsons gather to celebrate baby Jack’s first birthday.”

It’s Jack’s birthday, he’s in his birthday suit, Rebecca, dressed in her bathrobe, brings him a cupcake with a candle in it. She refuses to take her robe off a year after having the babies, Jack pulls her towards him and the babies start to cry.

Fast forward to the present day, it is little Jack’s birthday, Toby complains that Rebecca didn’t have to make a three-layer cake, Kate tells him it is tradition. Miguel walks in and asks when do Randall and the girls get there, Kate says later today. Toby says they are doing cake and presents early because they have a surprise for Toby.

Randall and the girls are getting ready to leave and talk about Rebecca’s clinical trial, she doesn’t agree with the tactics that he used to get her to agree to do it.

Its jack’s birthday, Randall and the girls arrive, everyone hugs each other. Kevin arrives at the same time. We see a flashback in between of Jack & Rebecca with the children turned 1. Toby has his camera, so does Randall, they are taking pictures and smiling at everyone. Jack has the running shoes on that Nick bought him, they are cute. Randall and Kevin sit down together to talk. Kevin tells him that mom is in a really good place right now, with her family, and it is what she wants and is best for her. Randall says congratulations to Kevin for one year sober. Tony takes Jack away for a diaper change, Rebecca decides this is a good time to make her announcement.

Beth pretends she lost something and leaves the room. Rebecca tells the kids that she and Miguel have been doing the research and she has decided to do the clinical trial. So, three weeks from now, she and Miguel are moving to St. Louis. Kate asks how long, Rebecca says nine months. Randall says they will visit as much as they can, whatever It takes. Randall hugs Rebecca. Kevin looks confused and asks Rebecca if this is what she wants, she says yes. Kevin hugs her and says whatever she wants.

Kevin, Randall and Kate talk, Kevin is confused because their mom took a complete turn-around. Randall says she probably sees the clinical trial as an investment into her future. Toby interrupts Kate, it is time for the surprise for Jack.

Kevin and Randall are left alone, Kevin says he wonders what happened to change mom’s mind.

Flashback to when the children turned 1, Rebecca walked out of the room and Jack goes to see her once the kids calm down. She says she has been thinking a lot about the children’s first birthday and she wonders what his firsts would have been as well, Kyle. She says they never even say his name, she can’t allow her brain to go there. She can’t watch the home movies of being pregnant, because that is all she has. Jack asks if she is up for a ride, she says yes. They take the three kids to see Dr. Katowski on their birthday, Jack says they wanted to see him.

Toby, Kate, and Jack are at the hospital, where it all started. They have a photo, Kate pins it to a wall of fame. Kate feels strange being back. Toby asks Kate if she remembers when she woke up, it was just the two of them after the c-section. Toby then tells Kate that he hasn’t been the best version of himself this year, but he is still here. He says her whole life has been defined by family, and jack deserves that. He then says Jack deserves a sibling. Kate says she can’t get pregnant again, with all the complications and risks. Toby knows that he was thinking about adoption and the Pearsons have a pretty good track record with that.

The visit with Dr. Katowski is going well, he tells them that he and his wife lost their first child. He used to sing to his wife’s pregnant belly, he would sing “blue skies.” He sings that song every day to that unborn child. The song made he and his wife so sad, every time they listened to it, it was like punishing themselves. But one day, his wife got pregnant again, and he sang that song again, then years later he sang that song at his daughter’s wedding. The song made him sad, but then made him happy. He says hospitals are like that, you can experience the greatest joys and the greatest tragedies.

Toby is getting Jack in the van, Kate can’t believe what he is suggesting, they just had a baby and have a crazy mortgage. They smile and agree they want another child.

Madison is pregnant, she is alone, she tells her doctor that hers is not a great love story.

Kevin goes into the kitchen to see mom, he tells her that he was really surprised about her announcement, she seemed so adamant that she didn’t want to go through with the clinical trial. She tells him that she just wants to invest in her future, Kevin looks surprised, that is what Randall said. Kevin goes outside to see Randall and asks him what he did to mom to get her to go to St. Louis. Finally, Randall tells him the truth. Randall is upset, he walks away not to argue with Kevin. The doorbell rings, it is Madison. Randall tells her it is not a good time. Madison sits down and tells Kevin they need to talk. He says they made a mistake, she says she is pregnant and he is the father.

She says she is sorry. She says she realizes that she is just his sisters’ friend and a complete stranger to him, she honestly knows nothing about him other than he loves his highschool girlfriend. She has decided to go ahead with this, this is kind of a miracle for her, and she will not ask anything of him, he can still find the great love story that he deserves. Kevin tells her he has to go outside, he needs a minute. Outside, Randall walks up to Kevin and tells him that he is not going to run away from this, just because Kevin spent an afternoon with their mom, he doesn’t know her. Randall tells him that he doesn’t give a rat’s ass about anyone other than himself.

Kevin tells Randall this is about him, his wanting to save mom. Kevin says that Randall spins this narrative that he took care of the family, and if that is the case, where was he when at the fire, he would have pulled that man out. Randall says they will never know because Kevin wasn’t there and he died ashamed of him. Randall says that is what gets to him, the shame their father had for Kevin and how proud he was of Randall. Kevin says he used to think the worst thing that happened to him was the day that dad died, it’s the day they brought you home. Randall turns around and he leaves with his family.

Kevin goes back into the house, he tells Madison he is so sick of chasing ghosts and doubting himself. He says he is all in, whatever she needs, he is all in. He says he wants this, he wats to be a father. He says the love of his life will be his child. Madison says children, its twins.

We see a much older Kevin, Randall, and Miguel, they are in a hospital room, Rebecca is in the bed. Kevin goes to the bed and says hi mom as a young boy walks in and calls Kevin dad. Then, we see his daughter.