BY Dorothy Gale on October 27, 2020 | Comments: Leave Comments
Related : Recap, Television, This Is Us, TV 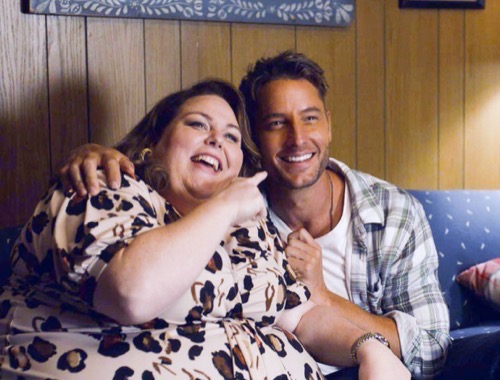 Tonight on NBC their honest & provocative dramedy series This Is Us airs with an all-new Tuesday, October 27, 2020, episode and we have your This Is Us recap below.  On tonight’s This Is Us season 5 episode 1 called, “Forty: Part 1” as per the NBC synopsis, “Part One. The Pearsons gather to celebrate their 40th birthday while musing about the day they were born.”

Kevin is sitting across from Madison and just received the news that she is pregnant with twins, he asks her what now and she says she has no idea about the virus and everything. Kevin tells her that he is a movie star and if something was really wrong he would know. All of a sudden, Kevin gets a call – but we don’t see who it is from. In Randall’s house, they are sitting at dinner and the kids are talking about the virus. Randall tells Beth that the clinical trial is postponed after all that, but mom and Miguel are at the cabin and will ride it out there.

Kevin has a mask on, he goes to see Kate and Toby, and remains six feet apart. Madison gets out of the car, Kevin tells them it is twins. Kate looks like she is going to faint, Toby is happy. Kate says they need a massive air hug and tells the congratulations. Kate’s neighbor sees them on the lawn and gives his congratulations.

Beth tells Randall that Madison is having twins and they are Kevins. Rendall sends Kevin a text and congratulates him, Kevin tells him that it is good to hear from him.

Kevin and Madison are alone, she tells him that she is comfortable and loves where she is, but he can stay there, in the guest room – he says perfect.

Randall gets a news story on his phone, it is about a black man who was killed when an officer knelt on his neck and the man could be heard saying, “I can’t breathe.” Randall speaks to his therapist on video, she lets him know that she is there for him and they can talk about anything.

Madison tells Kevin that since his 40th is not far too off, they could borrow her grandparent’s camper, quarantine first, and go see his parents.

Randall tells Beth that he is doing two sessions a week with his doctor. She comes on, and he asks her if he can take a rain check. He asks her if she wants to go to the cabins since the whole family drove out there, he says no. He tells her that he really doesn’t even know if it is his birthday, it is a farfetched story that a newborn was found in a fire station all in one day.

We get a flashback to when Kevin and Randall were born. Rebecca and Jack are on the way to the hospital, she is in labor. Meanwhile, Randall’s mother is with William, she tells him that she wants to go up to Assistant Manager at her job so they can provide more to their son. Then we see his father holding Randall as an infant, his mother is on the floor, the medics are there, she is dead. The medic tells him that they need him to wait there, he is gone with the baby. We see him on the bus, we see the fire station. He leaves Randall in a wooden crate on the fire station floor.

Rebecca and Miguel are at a cabin, they are picking apples. She tells him that she can’t believe the boys are 40, and Randall is not there. Inside the cabin, Toby tells Kate that 40 looks good on her. Kate wants Randall there, she says it doesn’t feel right. Miquel and Rebecca come back to the cabin. Rebecca says that she is making all of Kate’s favorite recipes, she feels like magic. Kevin tells Madison that he is all about this rustic lifestyle. She tells him that she was getting out of bed, she didn’t see the suitcase and fell on her stomach, and she hasn’t felt the babies move in 20 minutes. She says she is freaked out and wants to go get checked out.

At home, the girls are arguing in the kitchen, Randall walks in and tells them enough. Everyone wishes Randall and happy birthday. Beth can see that Randall is not ok.

Kate and Toby have decorated the cabin, Rebecca says she is going out to get them a surprise birthday cake; Kate hates that she is going alone but the doctor says it is important that she keeps her independence.

Madison and Kevin are with a doctor, she takes an ultrasound, she is only getting one heartbeat; she tells them not to jump to conclusions.

We take a look back at Randall’s mother, she didn’t get the job and is upset. William tells her that everything is going to be ok.

Malik shows up at the house, he brings burgers to Deja, he wants to create the same meal they had when they first met. Randall asks Malik if he watched the video of George, he says yes, he watched it with his dad and took a walk right after, it was hard to watch. He also has been protesting with his family. Randall tells him a story about a guy named Johnny, he got pulled over for an expired registration. He got pinned down by five officers and died right there. Growing up the way he did, he always thought when stuff like that happened it stayed outside the house.

When Johnny was killed, he was older and watched it alone, it was a lot for him to take in at an early age. He tells Malik that he has never said that to anyone out loud before. Kate is calling Randall, he ignores the call. He tells Malik that he is his best friend, but he is also his daughter’s boyfriend and he is going to have to choose. The two laugh. Kate sends Randall a message and tells him that mom is lost and she could use his help.

Rebecca is in the hospital in labor, she just wanted the music to play and Jack forgot the radio so he leaves to get it for her. She tells the nurse that Jack is anxious. Then we see Kevin and Madison, they are still waiting for the news. Kevin asks her if she trusts him. She says yes. He tells her that their babies are going to be fine, he can see it, they are going to have two beautiful and healthy children and they are going to be amazing parents. He tells her they should just shock the world and get married, she nods yes. The doctor returns to the room, she is going to do a vaginal ultrasound to make sure that everything is ok. There we are, two heartbeats and they are very strong.

Madison and Kevin are in the car, getting ready to leave. She tells him that she thinks he is pretty fantastic and frees him from his kind of sweet, Jerry Maguire proposal. He says he is not taking it back unless she wants him to take it back. He says there you have it.

Willliam is on the bus after dropping Randall off at the fire station. He thinks back to a conversation he had with Randall’s mother, she says that if she cannot become the mother that her child deserves, she asks him to promise her that he will make him a family. William gets off the bus and heads to the hospital.