BY Dorothy Gale on February 11, 2020 | Comments: Leave Comments
Related : Recap, Television, This Is Us, TV 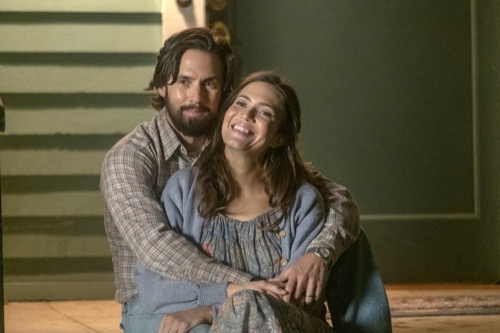 Tonight on NBC their honest & provocative dramedy series This Is Us airs with an all-new Tuesday, February 11, 2020, episode and we have your This Is Us recap below.  On tonight’s This Is Us season 4 episode 13 called, “A Hell Of A Week: Part 3” as per the NBC synopsis, “Kate finds strength in unexpected places.”

Kate can’t sleep, Jack encourages her to tell him a story – they both join in and come up with a story about a princess.

Present day, Kate is in bed with Toby talking about the fact that Toby said their son’s blindness made him sad. Toby doesn’t want to talk about it, he wants to have one good night of hope reading about a little girl that had the same thing as their son and got her sight back.

Young Kate is in a record store smiling when her boyfriend Mark walks in, they both tell each other that they love each other. She invites him to a family dinner.

Kate and Toby are packing for their weekend, they are going to a retreat with other parents who deal with having a blind child. Rebecca calls Kate to find out if they are on their way, she tells her that Toby has a big project at work and won’t be able to go. Rebecca offers to go in his place. Kate’s neighbor, Gregory, bought her a ball to take with her to the retreat.

Back to a younger Kate, Mark is upset with her and doesn’t go to the dinner. He says he is raging because she was so helpful with a customer in the record store the day before. He says he is no longer mad at her, and he will see her tomorrow for her mom’s thing. Rebecca knocks on her door, tells her that she has been busy and feels like she has missed out on Mark – Kate tells her he is coming to dinner the next day.

Rebecca says maybe they should go get coffee first, before dinner, to get to know each other. The next day, Mark shows up for coffee late. He charges in and orders a coffee without saying hello properly. Rebecca tries to start a conversation about how they should be happy working together and Mark announces that he quit his job earlier that day because his manager said he was taking too many smoke breaks. Mark says he is going to make music with Kate, then he suggest the two go to the family cabin and do it there – Rebecca is not thrilled.

Kate and Rebecca are at the retreat, Rebecca tells her that she is excited to be there with them. They go into a conference, Rebecca is taking notes. They see how different children and parents deal with blindness.

Rebecca asks her mom for the keys to the cabin, she says she is going with Mark. Rebecca says she doesn’t feel comfortable giving her the keys and leaving her alone with Mark. Kate becomes defensive, she tells her mom that after her dad died she genuinely was not happy, and now she is, Mark loves her. Then she tells her mom that she is going to the cabin now, not tomorrow, so she can enjoy her dinner without them and not to worry, Miguel can pick up the pieces. Rebecca says that it is not fair.

Kate is on the phone with Gregory, telling him about their day. Rebecca thought it was Toby, Kate tells her that Toby didn’t have a work thing, he has been struggling with their son’s blindness and every time he looks at him he is sad. Kate said she spent half the day panicking about putting on a bathing suit and she doesn’t even know if she will be able to ride a bike with Jack. Rebecca tells her to get on her bathing suit, they are going swimming. Kate and Rebecca have on their bathing suits and are swimming. Her mother tells her to let the weight go, she is there, she can put it on her shoulders. Kate tells her that she doesn’t feel strong. Rebecca advises that she tell Toby to step it up, and if he doesn’t, then she is more than capable of raising their son on her own.

Kate and Mark are on their way to the cabin, they are both singing and Mark is not paying great attention to his driving. She tells him that she is going to miss him at the record store, he suggests she quit too then; but she doesn’t want to. Mark gets upset and starts driving recklessly, he is swerving and shouting at her. She begs him to slow down, he slams on the breaks. Kate gets out of the car for air, Mark shouts that he cannot even look at her fat face and drives off leaving her there.

Rebecca tells Kate about her being diagnosed with mild cognitive impairment, which could eventually lead to Dementia or Alzheimer’s. She says she doesn’t know how much longer she has before she gets worse, so she is tired of being sad and just wants to be happy. They hug each other and cry. Later that evening they take the stage in a lounge and sing together.

Kate and Rebecca return home. Kate says she is going to be very clear what her family and what she needs from him. Kate promises to call her later in the night, Rebecca tells her to go do what she has to do.

Kate is home, she puts down Jack, Toby walks in and asks her how it was, she says incredible. Kate asks Toby if he can be the man that she needs him to be, the father that Jack needs him to be, he says he wants to. Kevin calls just then, Kate tells him it is not a good time. Randall is in a bad way too, they three way. Randall asks her if she wants to join them and go out to the cabin. Kate goes to see Toby, she tells him that she needs him to be a good father and she is going to take Jack to the cabin, she needs space. Toby says he will keep Jack for the weekend, he needs to spend time with his son. Kate says ok.

Kate and Mark are in the car on the way to the cabin. Rebecca tells Kevin that she is worried about Kate. Kevin calls Randall, the three of them get ready to go after Kate.