BY Annemarie LeBlanc on November 10, 2020 | Comments: Leave Comments
Related : Recap, Television, This Is Us, TV 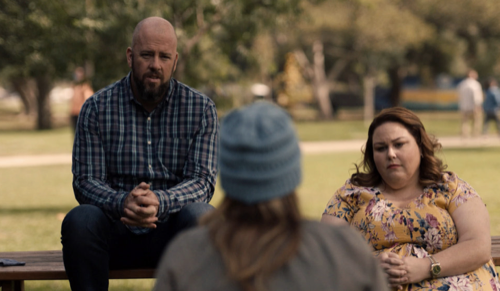 Tonight on NBC their honest & provocative dramedy series This Is Us premiere with an all-new Tuesday, October 10, 2020, double episode and we have the second part of your This Is Us recap below.  On tonight’s This Is Us season 5 episode 3 called, “Changes,” as per the NBC synopsis, “Kevin and Madison navigate their engagement as Kate and Toby take a big step in their adoption journey. Meanwhile, Jack and Rebecca brace for puberty.”

We see a grandchild, Lynn, fishing with her grandfather and he tries to teach her patience and when she listens, she catches a fish.

Randall, Kevin, and Jack are at the family doctor; Randall put on three pounds and Jack is thrilled, it is good for football. Rebecca and Kate are sitting outside when they come out.

Randall is looking for another therapist, he goes through one after the other. Meanwhile, Beth has made pancakes for breakfast for the girls. Randall walks in and Beth tells them there is a lot of attitudes this morning. Randall tells her that he thinks he found his therapist, he checks all the boxes; young, black, and a father. Randall tries the pancakes and compliments Beth on them.

It’s 5 am, Madison gets up and makes breakfast for her and Kevin. He sees balloons and asks who are they from, she says from Rebecca and Miguel. Kevin gets a part, he tells her that he should stick to protein and water from now on because he will be shirtless in the film. He gets a call, tells her that he has to go and will cook her dinner, Madison looks lonely.

Kate and Toby are at the park, they are going to meet Ellie and Willow. Kate tells him that she wants this so badly. All of a sudden, Ellie walks up to them and says hi. Ellie says that she married her high school sweetheart and loss him to cancer. It took her years to think about another man, she went on a match and found this guy, and fell into bed five hours after meeting him. She goes on to say that this baby will do better if she is raised elsewhere.

We go back to Rebecca and the kids when they were teenagers. Stewart shows up at the house, a friend of Kates.

Randall has his first real appointment with his new therapist. Randall tells him that he is married to a black woman, his therapist tells him that he has nothing to prove to him. He gives Randall an assignment, tonight right down something from his childhood that he would like him to know.

Kevin and Madison are going for a walk, he keeps talking. A woman runs up to them and says she is a big fan, asks for a picture. Kevin does a social distance selfie, Madison starts to walk away. She looks upset and he asks her what is wrong; she basically tells them that they are basically strangers.

Back to Kate and her friend Stewart. Jack and Kevin walk in from football, Jack says it went really well. He asks what is going on, he says it is a study group and everything is ok.

Kate and Toby are still with Ellie, Kate gets a text that diapers are missing at home with the sitter. They get into an argument with Ellie who does not look happy about it. He apologizes to Kate for leaving the diapers in the car.

Beth and Randall are watching a profane, mocking dance video that Tess made with her friend Alex and posted online towards a teacher that was touching her hair. Beth closes the laptop and they tell Tess there is no reason for making such a video. Tess says the teacher didn’t get the message when she asked her to stop, but she got the message when she posted the video. She says she is done being the prissy quiet little girl they raised in the straight white suburbs, this who she wants to be, this is who she is. Beth tells her to go to her room.

Kate tells Stewart that he can stop pretending why he picked her study group, she misses him too.

Beth pours a glass of wine for she and Randall, he tells her that Tess is lashing out. She did not go about this the right way, but a part of him is proud of her. If something bothered him at her age, he swallowed it. He always thought Tess was like him, but she is coming into her own and won’t have to go see a therapist when she is forty to figure that out. Beth says there are consequences for what she did, and they can’t play good cop, bad cop. Randall asks if she wants him to talk to her, she says yes.

Kate and Toby drop off Ellie, Kate apologized if there arguing made her feel awkward. They all laugh about it and Ellie says she has a strong feeling about them.

Kevin is washing dishes when Madison walks into the kitchen. He tries to apologize, she says he did nothing wrong. She says she had an eating disorder and then comes this pregnancy. The reason she put the ultrasound on the fridge is to remind her to eat food to keep their babies healthy. She tells him that it is hard to adjust to gaining weight and being happy about it. She goes on to say that she has been hiding a lot of herself from him. She says she loves their babies, she is just dealing with a lot right now, it is on her.

Jack is in the garage with Kevin, they are doing practice football exercises.

Kate tells Rebecca that Stewart wanted to be in her study group because she was doing a desert project, not because he wanted to be with her. Rebecca tells her that she is really proud of her and loves her.

Toby restocked the diapers, he and Kate talk about Ellie. Kate is excited and Toby is terrified that she could change her mind.

Randall goes to see Tess in her room. He tells her there is a right way and a wrong way to get your point across, and this was the wrong way – telling adults to screw you on the internet, that is not her. He tells her that they are taking her phone away for six weeks and she won’t need it because she is grounded for six weeks.

Jack is still in the garage with Kevin, he tells him that if he puts his mind to it he can accomplish anything.

Kevin tells Madison that he plays a trial lawyer in the movie and he counts calories, he also prefers to work out in a dingy gym than one in Hollywood. When he became an actor, he got famous for taking his shirt off. He is getting older, and it is getting harder. And he is not drinking anymore, which makes it even harder. He has stuff, a lot of stuff, including stuff with his brother that he still has to work out. He lays in bed sometimes and just worries. Worried that he will pass that on to his kids, the unhealthy stuff.

She says her too. He tells her that he is an alcoholic and a workout addict. And sometimes he gets foot corns. She says it is bulimia, her eating disorder, it almost killed her when she was seventeen. She has a handle on it, but even now her daily state of mind is determined by her weight. Also, she is obsessed with the show Outlander and has gone to conventions. They both smile.

Back to the grandfather with his grandchild. She asks him about a woman that is in all the pictures in his house. He serves her dinner. The woman in the pictures looks like Randall’s mother.