BY Dorothy Gale on November 17, 2020 | Comments: Leave Comments
Related : Recap, Television, This Is Us, TV 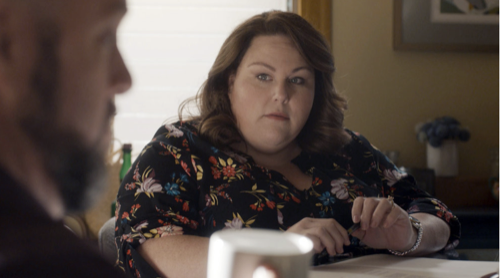 Tonight on NBC their honest & provocative dramedy series This Is Us premiere with an all-new Tuesday, October 17, 2020, double episode and we have the second part of your This Is Us recap below.  On tonight’s This Is Us season 5 episode 4 called, “Honestly,” as per the NBC synopsis, “Malik shadows Randall at work. Kevin struggles to connect with his new movie director. Jack and Rebecca struggle to sleep train their babies.”

We go back to when the kids were young, Rebecca and Jack are not getting much sleep, Miguel has given them advice, let Kevin cry it out. The moment Kevin cries, Jack is up!

Fast forward to when the kids are teenagers, it is morning and Kevin is tired, Jack is rushing the kids out the door for school. Rebecca is worried that Kevin is exhausted.

Present-day, Kevin, and Ava arrive to meet their movie director who makes a fuss over Ava and completely ignores Kevin.
Toby and Kate have the adoption papers on the table.

Back to when the kids were babies, Rebecca and Jack ended up getting up to comfort Kevin and get him back to sleep – then he wakes up again and Jack reminds her that they have to let him fall asleep on his own.

Coach tells Jack that there were bumps on the field, Kevin didn’t know his playbook. He has kids with half his talent, working harder than Kevin, he has to put the work in.

Kevin and Ava are reading their lines in front of the movie director, he tells Ava that she is giving him everything that he needs and ignores Kevin again.

The director keeps interrupting Kevin and giving him a hard time.  While shadowing Randall, Malik lets slip that Deja watches his live stream every day.

Kate and Toby are at the ultrasound for their adoptive mommy’s baby, her heartbeat is strong.

Kevin is still crying, Rebecca is upset and tells Jack he is going to be emotionally hurt by all the crying. Jack tells her it is just six minutes, but she still insists on going into the room.

Rebecca and Jack are home from practice, Kevin says he is tired and wants the night off, Jack says no. Then Kevin says he is quitting, Jack reminds him that he has a commitment to the team, he is the quarterback. Kevin goes to his room. Rebecca tells Jack that he is clearly miserable and if he wants to quit he can, Jack disagrees.

Malik is taping Randall’s live stream, in the middle of it he gets a call and leaves Randall who thinks the video stopped when he finished. Randall takes off his shirt, dances around, and talks to himself, all the while the video is playing and the whole city is watching while Malik is on the phone.

Rebecca tells Jack that Kevin is supposed to be a client playing a game and having fun. He tells her that she always lets him bail and it has made him soft. Kevin is in his room, he tells Randall he needs help, he keeps messing up the plays.

Outside the studio, Kevin waits for the director to speak to him, he tells him that he was pretty rough on him and wants to know if he has specific feedback so he can be better. The director says that today he was a good actor, but he can be remembered for that, or he can be a great actor. Kevin says he will see him tomorrow.

Kate is outside with the adoptive mother’s baby, she is upset, at the ultrasound Kate called the baby Chloe, she has already named her. She tells Kate she deserves the baby whatever she wants. She tells Kate that she is having second thoughts, but not about this, about she and Toby, she is 100% sure.

Malik apologizes to Randall, who tells him off, he says the work is serious and he expected for him to take it seriously. Malik says he messed up, but he had to be up at 4:30 am by the time he takes care of his daughter before he gets out of the door. Randall says he was seventeen when he lost his father, he thought he owed it to his family to make his dreams smaller, he was wrong.

He tells Malik to make his dreams bigger, not smaller. He tells Randall that he is a straight-A student and will go to an ivy league college. What he needs is a killer internship, maybe city hall; Randall says that can be arranged.

Jack is still trying to get Rebecca to let Kevin cry, she is having such a hard time.

Kate gets a call from Kevin and tells her that he had the worst first day with the new director. She asks if it is worth working with him. Kevin says he has been thinking about mom a lot and how nice it would be to do something great for her. He would like to win an Oscar and take her there and thank her in front of everyone for what she has done for him. Kate tells him that he has been fighting with Randall, at the birthday party he told Kate that being a black kid growing up in a white family was difficult. Kevin says mom and dad did a lot for him when he was growing up.

Randall is home, Deja jokingly tells him that he is ruining her life. Beth gives Randall a glass of wine. Randall gets a call, his video is going viral.

Kevin receives a package at the boy, it is from the director and the card reads, “atta boy.”