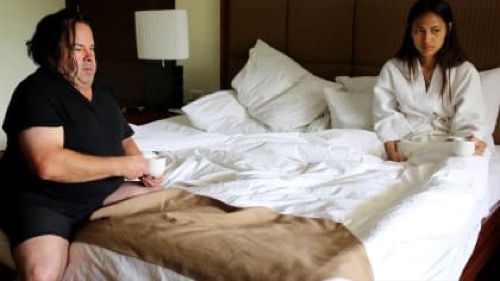 Tonight on TLC their popular reality show 90 Day Fiancé: Before the 90 Days airs with an all-new Sunday, April 26, 2020 episode and we have your 90 Day Fiancé Before the 90 days recap below for you. On tonight’s 90 Day Fiancé Before the 90 Days season 4 episode 10 “Cuts Both Ways,” as per the TLC Synopsis “Darcey has a surprise visitor. David doesn’t give up on Lana. Ed confronts Rose about her sister. Avery attends Ash’s seminar. Stephanie and Erika try to reconnect. Geoffrey and Varya go camping. Yolanda looks for answers. Lisa and Usman wait for a decision.”

David is in Ukraine and in front of an apartment door hoping he’ll find Lana. An older gentleman answered the door. He tells David that he has never seen Lana and doesn’t know of her after David shows him a picture. He leaves the building and is emotionally defeated. He doesn’t know what to do the whole thing is been let down.

Ed and Rose are headed on vacation. They say goodbye to her son. Rose’s sister Maria will take her son well they are on vacation. Ed has not told Rose that Maria has asked him for money. Ed hopes he and Rose will grow close and he can hopefully propose. It’s one of the biggest decisions of his life.

After arriving the next day, Ed and Rose are in the hotel room. He has prizes for her. He gives her a bathing suit and lingerie. Then he gives her some Listerine and toothbrush and toothpaste because he has noticed that her breath smells bad. She explains to him that she has an ulcer in her stomach and that it is not her mouth. She is extremely insulted and wants to punch Ed but does not tell him this.

Darcy is back in Connecticut after visiting Tom. She’s tired and emotionally drained after everything that happened. She is ready to start her new chapter and get excited about all her prospects. She is done with that relationship.

Meanwhile, Tom is headed to Connecticut. He has a letter he wants to give Darcy to explain how he feels. He has to travel to our house because she has blocked all forms of communication. He doesn’t have a great feeling about this but he wants to try.

Stephanie is in Australia to visit her girlfriend Erika. They didn’t have a good night last night because they went to a party with her friends and she discovered that Erika previously hooked up with a friend. Stephanie left the party and went back to the hotel where she stayed the night alone. Now she is at the botanical gardens, meeting with Erika so they can talk about it.

Stephanie apologizes for asking certain questions at the party and embarrassing Erika. She did it because she wants to learn a lot about Erika and her friends and she’s also under a time constraint visiting. Erika feels like Stephanie should have talked to her personally about her insecurities. Stephanie admits to her insecurities but really wants to work on their relationship.

Geoffrey has been in Siberia spending time with Varya. The night before he told her family that he served time in prison for drugs at one point in his life. They talk about it and Varya admits that she’s also concerned because it could affect their future. They say goodbye to her mother, they are headed on a camping trip.

Usman and Lisa have yet to get his mother’s blessing. Lisa has done everything. They had to meet his mother to try again. His mother does not want to give her a blessing because Lisa is older than her son and that is not traditional. They tell her that he will go to the United States where they will marry, and he will have more opportunities. But he plans to return to visit every year. She tells him she will think about it. After he cleans with her she finally says yes. While they received his mother’s blessing, Usman still hopes that Lisa will work on her control issues and jealousy. And that will not continue into their marriage.

Yolanda is taking a walk with their kids. They ask about Williams. She tells them that she hasn’t heard from him in a week. But yesterday a woman reached out to her, telling her that Williams account and data was hacked. Yolanda‘s kids tell her that this all seems like a scam. Yolanda doesn’t think that’s the case.

Ash and Avery are at his seminar. He has several women in the audience, and no men. He starts to talk about the differences between men and women and Avery instantly sees this as sexist. One of the women in the small audience raises her hand to comment that both sexes have masculine and feminine traits. Avery does not look happy at all and this seems to distract Ash, who stumbles during the seminar and has to ask for a couple of minutes. He leaves the room and Avery follows him.

Usman goes out to find a gift for Lisa and sees his brother. They talk about his troubles with Lisa and how she is jealous and can become angry.

Ed and Rose are on an adventure. He hopes that today will be good after he told her she had bad breath. He feels bad. They end up seeing monkeys. They are a little violent. Ed doesn’t like the monkeys anymore.

Later, Ed has the hotel set up a very romantic dinner for them. He wants to propose to her but he needs to know about her sister in the money first. Dinner comes and he tells her that he’ll talk to her after but she insists that he explain now. He explains the story tour and she is silent.

Tom arrives at Darcy’s. Stacy answers the door and calls for her. When Darcy comes to the door she asked him what he is doing. He explains that he is there to apologize. He explains that he is going to give her a letter because he could never find the words to explain to her how he feels. She doesn’t think it’s fair that he has a letter. He’s had all the time in the world to tell her. He tries to hand her the letter but she tells him she doesn’t really care. She shuts the door in his face. He gets in the car irritated, same old Darcy different day. At least he tried.

Stephanie wants to make things work with Erika so she is going to try and open up more and trust her. They are going to go and throw a boomerang. They meet with a master carver, a boomerang maker who is going to teach them. They get into throwing the boomerang. Stephanie tries her hardest. Erika is having fun. After, they talk before heading to dinner. Stephanie realizes that both of them need to come out to their families.

Varya and Geoffrey are on their way to go camping. She is still thinking about what he told her family the night before. She’s trying her self to see if future with him. She knows her family will never trust him.

They arrive to meet his friend Igor, who is also Russian. After they put up their tents they sit and drink vodka while eating. When Geoffrey leaves for a minute, Igor asks her what she thinks of his friend. She tells him that she does like him but she still taking notes. Igor vouches for him, saying that he’s a really great guy. She is not sure if she can trust him.