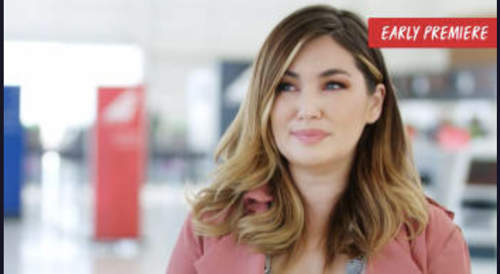 Geoffrey finds himself caught in the middle of a sticky situation; Ed returns home; Stephanie reunites with her mom; drama ensues when Lisa meets with Usman’s elders.”

Varya surprised Geoffrey. She wanted to show him that she still cared for him and that she was committed to working on their relationship. Varya flew all the way from Russia to do this. She showed up at his front door as a surprise and that’s when she learned he was dating someone else. He was dating Mary. Mary was someone Geoffrey knew for a while and he sorta rushed into a relationship with her right after he returned from Russia. Geoffrey had wanted to feel wanted. He got that with Mary and not with Varya because Varya had turned down his marriage proposal. And so Varya was herself in for a nasty surprise when she met Mary.

Geoffrey had moved. He just hadn’t told Varya he was moving on and so all of this is his fault yet Varya and Mary went for each other. They got angry with each other. They fell into name-calling and Mary left first. She left because she didn’t feel like Geoffrey was supporting or even defending her. He almost seemed to be enjoying the catfight. Geoffrey liked knowing that two women were fighting over him and he did nothing to prevent it. The only reason it didn’t get physical is that again Mary left. She left and she took the roses she had brought Geoffrey with her. She hadn’t wanted him to keep them.

David and Lana were getting to know each other. They’ve technically been in a relationship for seven years and only now were they getting to know each other because only now is Lana willing to tolerate him. Lana has been running this relationship. She’s the one that hadn’t wanted to meet David until there was a camera crew there. She was probably even paid by the show to be there and so she wasn’t showing up because she cares for David. David and Lana do not have a real relationship. They were strangers to each other and their first meeting was a bust because Lana hadn’t wanted to answer the tough questions.

Lana hadn’t wanted to say why she gave him a fake address. She admitted to the tv crews that she didn’t give him her real address because she was concerned about handing it over to a complete stranger and so Lana doesn’t count the past seven years as a relationship. She considers it as if they were just talking to each other. She thought David would understand how they weren’t that deep about each other and he instead had blown their supposed relationship out of proportions. David thinks they’re in love. He thinks he and Lana were going to get married and live out their lives together. And he was so delusional that it was painful to watch.

Stephanie and Erika were thankfully over. Their relationship was toxic. Stephanie was constantly mean to her girlfriend. She also used the fact she grew up with illness as a weapon because she wanted Erika to reveal every detail about herself and all the while she got to sit in judgment. Stephanie liked judging Erika. She judged Erika’s friends, her sexuality, and her relationships with her parents. Stephanie judged Erika because she hadn’t actually wanted to be in a relationship with Erika. Erika was genuinely bisexual. She liked girls and she sometimes dated girls. Stephanie was different. Stephanie claimed to be bisexual and then did everything to push her first real girlfriend away.

A part of it was because Stephanie was ashamed of herself. She didn’t tell her mother about her sexuality because she feared her mother would be disgusted by her behavior and so Stephanie in turn felt ashamed for ever having feelings for another girl. She set out to end the relationship before it ever really began. She soon pushed Erika away and now she gets to go home without having to explain to her mother that she’s gay. Her relationship with her mother now gets to stay the same. Stephanie doesn’t have to deal with the fallout of coming out to her mother and her mother gets to pretend that Stephanie is straight.

Lisa and Usman were getting married. They had some minor setbacks in their relationship because they were from two different cultures and they expected different things out of a marriage. Only they seemed to truly care for each other. Lisa has forgiven him for messaging another woman and she stopped him calling him a Nigerian whore. She was asked by Usman to trust him and that’s what she’s doing now with the marriage. She’s trusting Usman didn’t cheat on her. Usman never really explained why he wrote the words “I love you” to another woman and he has had his own complaints about Lisa’s behavior. And so this marriage is happening in spite of everything.

Usman hated how outspoken Lisa is. He didn’t like it when she pushed back on his crappy attitude or demanded answers from him and so he was constantly asking her to lead. He wanted to lead their family. He didn’t really understand why she wanted an equal partnership. He thought that was just a thing she was saying now and boy is it going to be a nasty shock when the marriage does occur. Lisa doesn’t care for Usman’s old world ideals. She considers Usman’s marriage to her to be a step-up for him and she seems the type to leave him if he ever thought he was going to tell her what to do.

Ash and Avery were in an odd place. They both expected to be engaged by the end of Avery’s visit to Australia and that’s not what happened. They weren’t engaged. They were still together and they were working on their relationship. Ash was planning on visiting Avery in the States. He just needed to work on his visa issue. He technically wasn’t born in Australia and he doesn’t have an Australian passport. He needed to get one to better his chances at getting a visa to visit Avery. This was going to take time and that was fine with the both of them because they still need to figure a few things out.

The main issue is his son Taj. Taj needs his father and so Avery questioned Ash coming to the states. She didn’t want him risking the relationship he has with his son. Avery is also a parent. She’s the mother to a toddler and so it’s not like she picks up and moves to Australia. She needs to be with her child and he needs to be with his. They just needed to figure out how to be in a relationship with each other. The long-distance thing was eventually going to get in the way and so someone had to move. Ash and Avery haven’t gotten to that place where they’re discussing that and, so for now, they’re dating.

Darcey leaned on her sister following the breakup from Tom. Tom had been the one to end things because he met someone else and he cares for this other person. He cared for this other woman more than he did Darcey. Tom had hurt Darcey when he eventually told her the truth and so she kicked him out of her life. She wanted nothing to do with him. She didn’t even want to read his letter to her and so Darcey leaned on her twin sister Stacey. They live together. They go through all their ups and downs together. They also visited their brother’s grave together. Their big brother Michael had died when he was young and life hasn’t been the same without him.

Michael was their protector. He always looked out for them and the sisters believe life would be much different if he was still alive. Michael had been a lover of love. He probably would have given them advice on the men they were seeing and who knows maybe he would have warned Darcey away from Jesse and Tom. Both relationships had ended in disaster. Darcey put so much of herself out there and she never really received anything like that from the men she was seeing. Jesse had been younger and a jerk. Tom had been older and a jerk. And so unfortunately for Darcey, she has a type.

Stephanie flew back to the States. She’s no longer on speaking terms with Erika and so her life in the States is literally all she has now. This is what she chose for herself. Stephanie was happy she was later met by her mother and her dogs at the airport. She was glad to see them. She was glad to talk about the many cool things she did in Australia and the one thing she didn’t mention was Erika. Erika and Stephanie had been in a relationship. She’s met Erika’s friends and family. She was there when Erika revealed she was bisexual and yet Stephanie couldn’t do the same. Her last fight with Erika had been about when she was going to tell her mother she was gay.

Her mother will have to find out on her own by watching this season.

Usman and Lisa finally addressed the major issues in their relationship. They finally were going to talk about it and unfortunately, they chose to talk about it in front of Usman’s family. His family was already weary of Lisa. They thought Lisa and Usman might have problems in the US and that Usman would be left alone because he doesn’t know anyone there. So, Lisa airing their dirty laundry as she did had only brought up their doubts. They doubted the relationship would last and Usman himself was getting tired of having to argue every day with Lisa. He wanted to know why she wasn’t acting like a Nigerian wife and she kept reminding him she was American.

Lana and David were having issues. He kept trying to take their relationship a step further by asking for a kiss or some sign of affection and Lana wasn’t interested in any of that. Lana was just getting to know him. She didn’t count those seven years as dating and so she wasn’t in any rush to be with David. David was the one that wanted to get married. He made sure they took a lot of photos to go with the K-1 visa and he also invited her back to his hotel room. And Lana shot down any chance of sex because she said it was too early for that.

And Geoffrey meanwhile introduced Varya to his friends and it became awkward when Mary later showed up.