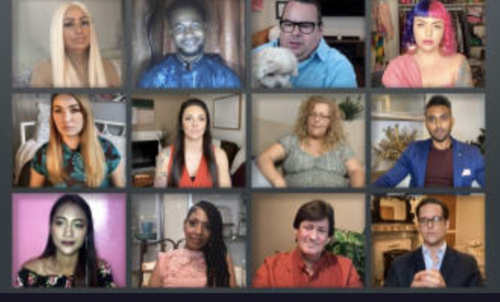 So make sure to tune in tonight between 8 PM – 9 PM ET for our 90 Day Fiance recap.  While you wait for our recap make sure to check out all our television spoilers, news, recaps, and more, here!

Part 3 of the Tell All! First up was David and Lana. The other cast members all believed this relationship wasn’t real and that it was created by David’s delusions. David was deluded. He created one excuse after another for why Lana remained on the dating site. He even tried to say it was illegal for them to talk of the site and both Ed and Tom called him out on it.

They said it was fine if David talked to Lana over social media. The guys figured she might have a social media account that David doesn’t know about and so they brought it up to him. They tried to tell David that Lana was keeping him on the site because she gets paid. She gets paid and David was the one paying the fee. He pays a fee whenever he talks to her on the dating site.

David laughed about it last time. He said it was a rich man’s game when he joined the site and so if he’s rich as he claimed then why did he buy Lana a fake ring. He proposed with a fake diamond. It wasn’t real and he had an excuse for that as well. David claimed he didn’t buy a real diamond because he didn’t want to spend money on getting it resized.

He said he didn’t Lana’s ring size and that she didn’t know the size either because she’s never worn a ring. David hadn’t wanted to spend extra money on the ring. He came up with the cubic zirconia as an alternative and so Shaun asked him about his history. She asked him how many women has he proposed to. He said he proposed to four other women. Two in the States and two in Ukraine.

David was asked if the other women got real rings. He said two of them did. He also claimed he hadn’t given the other two rings yet when the engagement fell through and so David has made a habit of falling in “love”. Ed didn’t believe him about the ring. Ed though the fake ring was a prop and so was the relationship. Stephanie on the other hand was more forgiving of David’s faults.

She thought the proposal was romantic and she was willing to accept David’s excuse for why he bought a fake ring. The show would have liked to have asked Lana about what she thought of the ring. Only she couldn’t be reached and so the show had to go on without her. Shaun next asked Tom and Darcey about the letter.

Tom had broken up with Darcey. He told her he wasn’t in love with her and that he had met someone else. He then felt bad about the way he handled things with her. Tom later went to her house with a letter he wrote to Darcey and it supposedly it was very apologetic. Tom handed this letter to Darcey. Darcey handed the letter off to her twin sister Stacey and Stacey tore it up. They tore it up without reading it. They threw it away and so there was no way of this letter ever be recovered or read, but that’s okay because Tom has a copy. Tom was going to read it during the segment when Darcey said she was going to step away if he did and so Tom didn’t read the letter out loud to the cast.

Tom waited to read it until the commercial break. He finally read the letter in which he told Darcey that she was an amazing person and mom. He also added that the relationship seems to have failed because she kept bringing up old baggage. Darcey would talk about her heartache with old relationships and it eventually got to Tom. He did sorta blame her for how the relationship ended. The letter wasn’t something Darcey had to hear and she’s probably won’t watch him read out the letter later on. If she’s smart at all, she won’t want to watch this episode of the Tell-All. It was mostly about Tom and his ego. He was even offended she didn’t want to read his letter and so he had been offended that he traveled that far for nothing.

Then there was Ash and Avery. Their relationship began deteriorating after Ash gave a seminar in which he came off as sexist and so that had upset Avery. She had tried bringing it up to Ash afterward. He accused her of being heartless because he said that she was kicking him while he was down. Ash said he truly felt betrayed she hadn’t stood by him and so Shaun pointed out how Avery was trying to help.

Avery tried to tell him where he went wrong. Ash was the one that stood firm with his sexists’ remarks and that’s why the two of them got into such a huge fight. Ash admitted he came across as a sexist. He said that was never his intent and he apologized for it. He didn’t really apologize to Avery for what he said and so the two of them are still on the outs.

Stephanie’s mom was still convinced it was a phase. She constantly tries to undermine Stephanie’s sexuality and so Stephanie was still dealing with her mom. Another couple that was glad they didn’t work out was Ed and Rose. There were so many problems between the two and the main was the lack of trust. Ed believed Rose lied to him throughout the relationship and he refuses to accept her explanations.

Darcey came in. She was upset with Ed’s behavior and she called him out on his treatment of Rose. Not that Ed wanted to hear it. Ed said he’s glad he didn’t bring Rose over because he truly believes she would have left him.