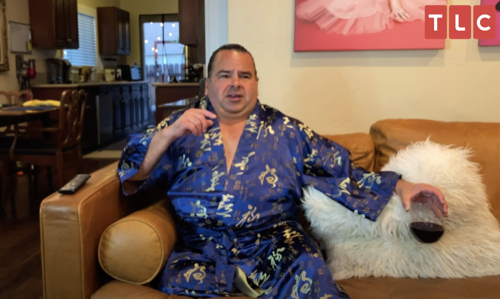 So make sure to tune in tonight between 8 PM – 10 PM ET for our 90 Day Fiance: Before the 90 Days B90 Strikes Back! recap.  While you wait for our recap make sure to check out all our television spoilers, news, recaps, and more, here!

Couples from the show will relive their biggest moments. In San Diego, Ed gets his wine ready. He is ready. To watch the show and strike back at the comments. From. Her home, Rosemarie is also ready.

Ed watches as he shoots several models. He recalls being told he has great nails. He talks about having a disorder with his neck and chest cavity and he wishes people didn’t make fun of him. He talks about dating Rosemarie. Some of the other members chime in. She is so young. Ed discusses how he bought Rose lots of gifts. Even though she says she didn’t get anything, like dresses.

It is on to Avery. She talks about her salads made with cannabis. She is really. Into health and witness. She talks about meeting Ash via Instagram. She didn’t like his hair but his spirituality. After a while, she realized that she saw some red flags when it came to him. The others believe she should have stayed with her ex. She reads several mean tweets about how she is too high strung and annoying. She laughs.

Yolanda wants to get right into the 1st episode. She wishes the gyms were open. She talks about her 40-year-old boyfriend, Williams. She watches videos of her and her daughter talking. Yolanda did believe what Williams said.

Back to Big Ed, he goes to visit his mom. Rose comments in the background about how Ed’s mom calls him Pony. She thinks he is more like a little pig. Ed watches the past footage of his mom, telling her about Rose and buying a ring. He talks about how his daughter won’t talk to him. He reads mean tweets but he doesn’t have any regrets.

Avery looks at a poll on social media about Ash. A majority of people believe he is a player. Meanwhile, Ash believes they broke up because she thought he lied about being on a diet alongside her.

Avery goes out to eat with her friends in a romper without a bra. She thinks she looks hot. She talks about Ash lying about why he didn’t get his visa due to bankruptcy. Ash shares that he never said that was why he couldn’t get one. He actually canceled the process after Avery broke up with him the day before.

Yolanda talks to her daughter about Williams. She reads social media posts about how Williams is a catfish, he doesn’t have a British accent. People want her to wake up. She laughs and takes it in stride, sharing she was in love.

Ed looks back at the mayo scene. Rose watches from her home in shock. Ed reads several tweets about how he should use conditioner instead. Ed also admits he lied about his height and he asked Rose for a good reason to take an STD test.

Later, he gets into his hot tub. He reads some rude tweets and defends himself, specifically his neck. Meanwhile, Yolanda reads more tweets and sees Chrissy Tiegan even commented. She gets excited. Yolanda and her daughter sit and watch the first episode. Yolanda looks back at when she told her family. She hoped she would find love again. Her daughter promises to help her find a real man.