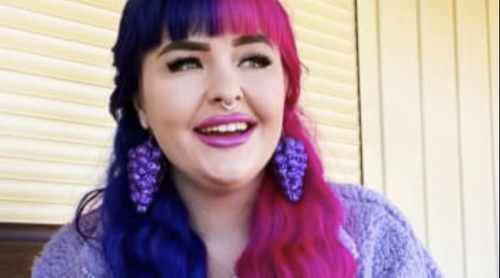 David is happy that people have seen that Lana is real and now he is going to show his tips on how not to get scammed online when you are looking for love. #1 don’t talk to anyone you can’t see on camera #2 don’t send money to anyone #3 if their first name sounds like the last name, run (like Williams) #4 Always have a backup plan – don’t go to a country where you don’t have something else going on, at least know the sights #5 don’t go to Ukraine, that’s my place. We go back to David’s first date with Lana.

After seven years of chatting online and four meeting attempts, David is finally with Lana. He says she is much more beautiful in person. One viewer says the date was awkward. David says it is, it’s the first time they have met. David says that he has given her about $500 a year in gifts. David tells Lana that he hired a private investigator to see if she was real; she then wants to go home.

Stephanie is home, Erika as well, they are watching the episode where Stephanie left Australia. Erika was sad to be leaving with having broken up with Erika. She wishes that Erika could have been there to say goodbye. Erika says that she didn’t even consider going to the airport. A viewer says that Erika probably slept like a baby when Stephanie left.

Avery sits down to watch the episode when she leaves Melbourne, she made soup and put some CBD oil in it so she is less stressed watching it. Ash is at home watching, he says he was going to propose, he had the ring, but what after everything she put him through there was no way he was going to propose to her. A viewer says that Ash is no kind of relationship coach and Avery knows it, he is a serious mess. Also, Avery is using Ash’s son as her way out of the relationship, he told her he wants to marry her and she has zero reaction; she wants out. Another viewer says the amount of times Ash says actually, drives them nuts. Ash says he plans on selling the ring and getting some of his money back.

Ed says the way he gets rid of stress, through his martial arts training. Ed says he failed, he is not a failure. He is now looking for love again. We see him at the airport when his mother picked him up with Teddy. She asks what happened with Rose, he says they got in a big fight and she felt that he didn’t trust her. Ed knows he messed up and just wants to move on. But, in the back of his mind, he hopes Rose will one day speak to him. Rose says she misses his video calls, he was nice and romantic, but he wasn’t that way in person.

Back to David, we go back to when he took Lana on a bowling date. David wants to spend more time with her to make sure she is the one for him. They go around town and take photos to get a K1 Visa. They arrive at bowling and David tells Lana that if he strikes, she gives him a kiss.

Stephanie is home from Australia, her mother picks her up at the airport. One viewer says that they are sick of Stephanie talk about her illness. Now that she is home, she wants to tell her mom about the bi-sexuality even though things didn’t work out with Erika. She tells her mom that she had a disagreement with Erika, but they are still friends.

Her mother tells her to get back to her normal life and things will be ok. A viewer says that Stephanie is an energy/emotional vampire. She is so draining to watch, I can only imagine how drained Erika is from dating her. Erika says she was emotionally drained, but she is glad that people can relate to her and she appreciates the support.

On to the last day for Avery, she is going to the airport to go back home. One viewer asks if two people have ever had less chemistry than Ash and Avery, they would rather watch a jar of jam try to seduce a dog bed. At the airport, the two profess their love for each other. A viewer says that Ash is delusional and if he ever makes it to the states, Avery should smoke him out with the best chronic she can find.

Back to David and Lana, they take a photo of the friendship arch of the people. It represents the friendship of all the countries around them that have helped. They head to dinner afterward, he made a reservation and suggests wine. A viewer said that David and Lana’s hugs look uncomfortable. David invites Lana to his hotel, she tells him that it is a bit early for that.