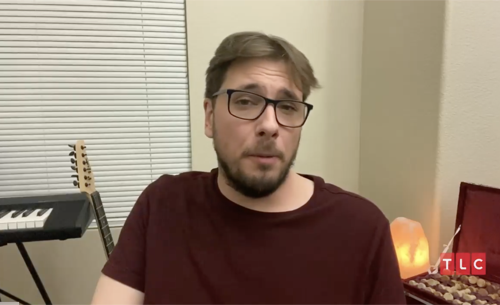 So make sure to tune in tonight between 9 PM – 10 PM ET for our 90 Day Fiance recap.  While you wait for our recap make sure to check out all our television spoilers, news, recaps and more, here!

The cast of “90 Day Fiancé: Self-Quarantine” taped themselves. They had no producers or tv crew and so they alone were responsible for the filming. The cast has had their lives changed because of COVID-19. They were all dealing with it in their own ways and some like Colt wasn’t alone. He lives with his mother and six cats. They’ve been keeping up their spirits by talking to each other and treating their time away as a vacation. Colt couldn’t work for home. He programs the slot machines and he was fired when it looked like they were going to be closed longer than they thought. Colt thankfully still has his savings.

He’s also had no contact with Larissa. His ex-wife hasn’t reached out to him and he has no way of contacting her. He doesn’t even know if she’s in Las Vegas. Their last contact had been at her third arrest and there has been nothing since then. Larissa moved on. Colt was doing the same and he was keeping a closer eye on his mother. She was elderly. It was her age group that was most affected by this coronavirus and so Colt was worried. His mother Debbie is a big part of his life. He doesn’t know what he’ll do without her and he needs her. Colt spent most of his time being there for his mother. And she, in turn, was there for him because Debbie was much stronger than Colt initially gave her credit for.

Then there was David and Annie. The married couple is still going strong. They don’t pay attention to the large age difference between them and their time in quarantine has been spent helping others. They’ve been delivering groceries. They’ve been trying to do what they could for others even if it meant not stockpiling for themselves and so they’ve been great. They don’t go to regular stores anymore. They didn’t want to deal with the anti-Asian bias. Annie wasn’t from China, but she was Asian and she knew she would be lumped in with the rest no matter her nationality. And so she shops at Asian markets.

Annie feels more comfortable there. She said it’s different when she’s surrounded by Asians because no one is harassing them there or looking at them differently. Annie also enjoys cooking. She cooks dinner for them every night and so she’s been enjoying their new apartment. They just moved into the place. The refrigerator had frightened Annie at first because she thought the ice maker was a ghost at first and she had a good laugh about it once she realized what it was. Annie cooks and dances in her new kitchen. She and David are happier than ever. The quarantine hasn’t really affected them and so they were good.

Cortney was different. Her relationship with Antonio hadn’t worked out and he might still be in Spain. Cortney said the relationship ended because of jealousy issues. She’s since moved on from and there appeared to be more between her and her new boss than friendship. Cortney has been staying with him for the past twenty-one days. She’s been with him since the stay-in-place order and they’ve been working together. She was the brand ambassador for his period cups business. His name was Andy and he was from Germany. He seems to like Cortney as in genuinely. He brings her breakfast in bed and so sometimes he was super nice and loving.

Other times it was like he was a total stranger. Andy has a temper and he could be set off by the simplest things. He doesn’t let Cortney film these moments. He makes sure she turns off the camera before they get into it and so Cortney has to explain what happens afterward. Like when she told the story about his hair. She had reached over to fix his hair for the camera and it led to a huge fight. They had turned off the camera during it. They didn’t turn it back on until she was alone or at least thought she was and before she knew it Andy was there asking her what would happen if he fixed her hair right then. And so quarantine for her was a toss-up between Andy’s many personas.

Danielle wasn’t enjoying her quarantine either. Her place was overcrowded. There were seven people staying at the house and there were just two bathrooms. Her grandchildren were also there. Between the kids and the pets there was always someone underfoot. Danielle’s only comfort is that she gets to leave the house. She has to wear face masks and she also has to take her temperature before she can meet with her clients. Her hours were also cut down. Danielle was losing a lot of money because of this quarantine and she was putting herself at risk as well. Her going outside for work was bringing her into contact with the coronavirus.

Danielle was once married to a Tunisian named Mohammad. They got divorced years ago and they had cut off contact when this pandemic happened. It gave them a reason to reach out to each other. They began talking again and they were in a better place now. They’ve forgiven each other for what happened in their marriage. They now stay in contact and she worries for him because he was a truck driver. He was constantly on the road. Danielle worried about him and she was feeling disappointed because her youngest daughter was supposed to graduate from high school. And now that graduation ceremony has been canceled because of the COVID-19.

Elizabeth and Andrei have a baby at home. It hasn’t made anything easier for them. The couple was arguing over everything it seems and their main problem was money. Elizabeth was the breadwinner in her family. She works at her father’s real estate and investment company and right now that company wasn’t doing so well. Her father was struggling. He’s had to cut her pay several times now and it’s hard for Elizabeth to get groceries. She tries to order it online. Her husband got upset with her because he thought she was over-shopping and he said they didn’t have the money. He sometimes didn’t speak to Elizabeth at all because he’s that frustrated with her.

Andrei had asked if her father could help them out. Elizabeth told him her dad couldn’t and she’s even tried to explain how bad it is to him, but he doesn’t get it and so they keep fighting about money. They fight about it almost every day. Them being so near to each other all the time has put a strain on their relationship. They’ve tried easing the tension by having wine with each other and doing puzzle pieces. They also used sex as an outlet to all the tension.