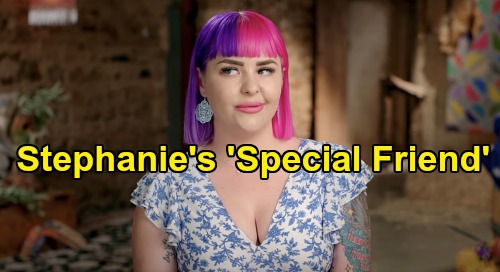 TLC 90 Day Fiance: Before The 90 Days spoilers tease that Stephanie Matto and Erika Owens will finally see a little levity and have a cute exchange while they’re off doing a fun activity together. But whether that cute exchange will cause some hurt feelings in the end remains to be seen, and we’re interested in your take on the matter.

In a new sneak peek video released on TLC’s YouTube channel, Erika takes Stephanie to see an older aboriginal gentleman who carves boomerangs. “Today I’m taking Steph to see a guy who makes some boomerangs,” Erika says. “Because I really want to show her a little bit of Australian culture. And what American doesn’t want to throw a boomerang when they come to Australia?”

Once they all get out into some open space, Roy asks what brought Stephanie to Australia, and she says that she’s visiting Erika. Roy then asks, “So, she’s your friend?” An awkward moment then ensues, and after a brief pause, Stephanie says, “Special friends.” Erika and Stephanie share a look and laugh nervously together.

Then, in the confessional, Stephanie says, “I tell Roy that Erika and I are special friends because I don’t really know what his beliefs are. I really just don’t want to get into a really weird discussion with this man. I just want to focus on the task at hand.” Erika is then shown laughing at the term “special friends.”

It doesn’t immediately look like Erika is upset by Stephanie’s use of the term “special friends” to describe their relationship. Rather, it seems that both Stephanie and Erika were amused by the whole thing and seemed to have a shared understanding that they might not want to get into the nature of their relationship with a stranger.

We’ll see whether Erika does end up questioning Stephanie about the way she handled the situation. You never know, it could turn into a point of contention between Erika and Stephanie down the line. Do you think that Erika will end up being upset by Stephanie’s use of the term “special friend” to describe her? Stick with 90 Day Fiance: Before The 90 Days and we’ll keep you up to date on all the hot new 90 Day Fiance news, updates, and spoilers!