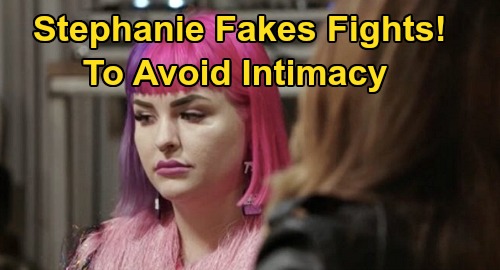 TLC ’90 Day Fiancé Spoilers’: ‘Before The 90 Days’ spoilers tease that Stephanie Matto and Erika Owens are having a terrible time as of late. As Before The 90 Days viewers know, Stephanie recently arrived in Australia to be with Erika, but things haven’t gone well for the couple in just about every way. There has been zero intimacy between Stephanie and Erika – in fact, they don’t seem to express any affection for each other at all.

Something’s just off here, and Erika has complained about Stephanie’s lack of intimacy with her. It doesn’t seem like Erika is meaning that she intended to immediately hop into bed with Stephanie, either.

There are a lot of ways that couples who are supposedly in love show intimacy – for example, through hand holding, touching, and loving glances.

However, we’ve seen virtually none of that with Stephanie and Erika, and it seems pretty one-sided. Erika seems like she wants physical intimacy with Stephanie, but Stephanie seems to have a wall around her that is totally impenetrable. And the more time goes by, the more Stephanie keeps putting up walls.

We have to wonder whether something deeply psychological is going on here. Could Stephanie be deliberately sabotaging her relationship with Erika because she simply doesn’t want to get physical with her? It seems like we’ve heard a lot of lame excuses from Stephanie about why she doesn’t want to be intimate with Erika.

First, Stephanie indicated that she was overwhelmed by meeting Erika, then she noted that she hadn’t been intimate with anyone for over a year, which doesn’t seem like much of an excuse. Then, viewers heard that Stephanie’s medication could be interfering with her desire.

But these excuses seem pretty hollow, and none of them are great reasons for having ZERO physical contact whatsoever with the person you say you are in love with. We think there’s probably something else going on here.

There’s widespread speculation among fans that Stephanie could not even be oriented toward women, but that doesn’t make sense given that Stephanie has said repeatedly that she loves Erika.

So, what’s going on here? Could it be that Stephanie just realized really quickly upon meeting Erika that the person she fell in love with long-distance just isn’t the same person that she ultimately met?

That’s certainly happened before with people who have interacted solely online and/or via phone and then met up in person later. Sometimes that person just seems different in real life, and it can be extremely disappointing.

We’ll see what happens as the season continues to unfold, but we suspect that Stephanie is deliberately holding back from Erika for reasons that she may not even fully understand at this point.

Could it be that Stephanie is nervous about being with a woman again? Sure, that could be part of it, but we doubt it explains everything that’s currently dysfunctional in Stephanie and Erika’s relationship.

What do you think is holding Stephanie back from showing Erika any affection? Keep watching 90 Day Fiance: Before The 90 Days on TLC and don’t forget that CDL is your place for all the hottest 90 Day Fiance news, updates, and spoilers!