TLC 90 Day Fiance Spoilers: Before The 90 Days: Yolanda Leak Still In Love and Chatting – Will She Ever Meet Williams? 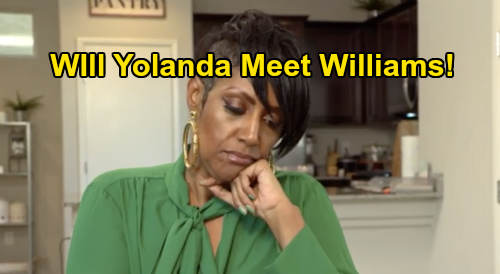 TLC 90 Day Fiance: Before The 90 Days spoilers tease that Yolanda Leak is back and it doesn’t look like her obsession over her online love “Williams” has diminished. As 90 Days viewers know, Yolanda got to know a person named Williams online, and she believed that Williams was English and that she’d get the opportunity to travel to England to meet him eventually. Yolanda shared months of conversations with Williams and even had pictures of him.

But then reality started to set in when Yolanda’s children decided to get involved. Williams’ Instagram page suddenly transformed into a Nigerian page, and then Yolanda got a threatening email saying that some provocative pictures she’d sent to Williams would be exposed if she didn’t comply. It was pretty scary, and Yolanda’s children soon discovered that Williams’ photos were actually stock photos.

Well, in the Before The 90 Days sneak peek that’s currently available on the TLC GO app and on TLC.com, it was revealed that a few weeks after Yolanda’s children seemingly exposed Williams as a fake, Yolanda was at it again, and that she reached out to Williams. In the sneak peek, Yolanda is seen texting Williams, and he responds.

At this point, it’s clear that Williams isn’t who he’s been pretending to be, and that he’s been deliberately deceiving Yolanda about what he looks like. When Yolanda talks to Williams on the sneak peek, he states in his texts that he’s been “broken” and that his only auntie died. Yolanda then asks Williams for a current photo of himself, and Williams balks.

In fact, not only does Williams balk, but he tries to reverse things on Yolanda, asking her how HE knows that SHE is who she says she is. Fortunately, Yolanda seems to be onto Williams at this point, and she realizes that he’s deliberately trying to turn the tables on her. Yolanda seems disappointed in her love, but when the producer asks if she’s still in love with Williams, she says yes.

One wonders just who this Williams person is, and whether viewers will ever find out who the person is who Yolanda has been talking to all this time. Of course, many viewers seem certain that Williams is a scammer who has been stringing Yolanda along with the purpose of extorting money out of her in exchange for not releasing her provocative pictures.

But what if TLC pulls the same kind of stunt that it pulled with David Murphey and his Ukrainian love Lana? Many viewers were absolutely certain that Lana wasn’t real, but then in last week’s episode, Lana turned up and exactly matched her photos. It was a real shocker – could TLC have something similar in store for Yolanda’s situation?

Might Williams be a real person who was the victim of a hack? Sure, Williams clearly isn’t the same dude that is pictured in the stock photos, but he still could be a real person who’s just skittish to divulge his real appearance because he’s self-conscious about his looks.

We’ll see what happens here, but TLC could be building to something here. Do you think that viewers will see a resolution to the “who is Williams” question? Will Yolanda ever meet Williams? Stay tuned to 90 Day Fiance: Before The 90 Days for all the hot reality show action. And remember that CDL is your place for all your news and spoilers on Before The 90 Days.