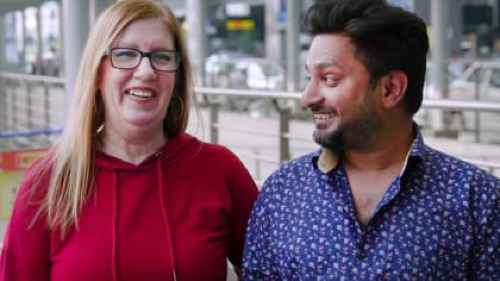 Jenny is shocked when she arrives at her new home in India; Chaos erupts when Brittany arrives in Jordan; and Jihoon reveals he is keeping another secret from Deavan.”

Jenny is headed back to India for the 3rd time to see the love of her life. She has lost so much. But this time she is asking for him to stop lying, get a divorce and hopefully they can get married. She arrives and is ready to see Sumit. When they see one another they hug and kiss. They promise one another no more lying. They head to his home. She loves being back.

Armando is eating with his parents. They live in Mexico. In a week he plans to move in with the man he loves. He needs to tell them. He begins telling them about feeling alone and scared, unaccepted.

He cries and soon his mother is crying too. She hugs him. He is happy to be hugged by his mom. His father grabs his hand and tells him he is his son. He tells them about the man he has met. This is all very difficult for them. He hopes they will accept this. His mother shares that she does. His dad says he needs time.

Deavan gets help from her mom. She is moving back to South Korea for the second time. Her mom is coming to help. This is going to be hard for her kids.

She is doing this for her kids because they need a dad. They head to the airport. She is taking a huge gamble. She says goodbye to her dad who is sad to lose all of her girls. She really hopes Jihoon comes through this time and isn’t lying.

Yazan is in Jordan. He is excited Brittany is coming tomorrow. He visits his dad. his mother doesn’t want to appear on camera. His dad wants to ensure she wants to convert. He also wants to see her divorced papers. Yazan wants to take it slow but his parents want them to marry. They talk about premarital sex and how that is not acceptable.

Ariela is in New Jersey. She is packing with her family. She is moving to Ethiopia. Her mom is a nurse who is going with her. She is also bringing medical supplies for delivery. The next day she says goodbye to her family and is very sad. She cannot believe she is taking a huge risk like this. She fears to feel alone.

Jihoon eats dinner with his friends. He tells them about Deavan coming tomorrow. He lied to her. He only has a part-time job. His friends cannot believe he lied. He isn’t much of a worker and now he is making Korean men look bad.

Jinny and Sumit arrive at their new home together. She is tired but they need to perform a ceremony to ensure they have a good future. Going through the home with a flower pot on her head, she sees how much they need to fix their home. They bring a cow in next and Jinny gets irritated and scared. They talk about how they need to live frugally since he owes for his divorce.

Brittany is on her way to Jordan to live with Yazan. He arrives at the airport with flowers. He sees her. They hug. On their way to the car, Brittany hugs one of the crew. Yazan sees she has. An alcove container in her bag. He becomes very angry. He is done. He feels like an idiot but all of this is against his culture.