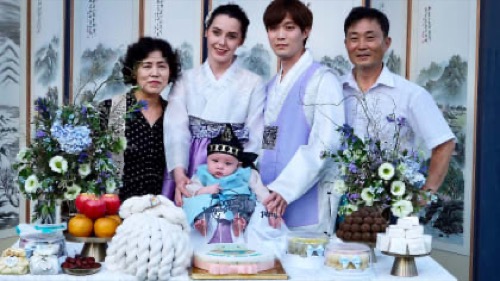 Deavan attempts to improve her relationship with Jihoon’s mom. Tim has a troubling job interview. Brittany and Yazan clash over her social media.”

In South Korea, they celebrate when a baby has reached a hundred days old. It turns out they celebrate this because a long time ago there was an issue in which a lot of babies passed away before they could reach that age and so now they hold a small celebration to honor how many children were going on to survive. Jihoon and Deavan’s young son has reached their age. They were going to celebrate it by going over to Jihoon’s family home and having a homecooked meal provided by Jihoon’s mother and Deavan. This was the first time Deavan was cooking with her mother-in-law. She was more doing it because of tradition and not because the two got on.

Deavan didn’t really have a relationship with her mother-in-law. She knew the other woman didn’t approve of her and that Jihoon’s mother wanted him to marry a Korean woman. There have also been several incidents in which Jihoon’s mother tended to think the worst of her. Like when she asked Jihoon to prove that he saved some money and he had to withdraw a certain amount of the account he shared with his mother. Deavan had thought that was okay. Her mother-in-law had thought Deavan was money hungry because of that and so there’s been quite a few incidents where Jihoon’s mother has really shown disregard for Deavan’s feelings.

Only Deavan put that aside as she cooked alongside her mother-in-law tonight. They prepared a meal and Deavan asked several questions as she went along. She wasn’t just following blindly. She wanted to know what her mother-in-law was thinking and the two seems to have bonded. They were finally getting along and that spelled great things for Jihoon. Jihoon was often caught in the middle with his wife upset with him in one corner and his mother disapproving of his wife in another. Jihoon was also trying to grow up. He now has adult responsibilities with two kids and a wife. He was doing his best to provide for them and he was doing a great job with the new apartment.

Over in Mexico, Kenneth was still adjusting to his new life. He was an openly gay man and he was learning how very different Mexico was in terms of the United States. He could be himself in the U.S. He couldn’t exactly be as open in Mexico because there was still a lot of homophobia there and tonight he and his fiancé Armando were called a homophobic slur. They were just sitting down to enjoy a meal when someone shouted at them while they were walking by. Armando realized what was happening first and he told Kenny and Kenny’s daughters what was happening. They were all pretty upset with it.

Kenny’s daughters were especially angry. They’ve never really experienced anything like that and they sure didn’t want their father to have to live with it. It was just one more thing Kenny had to get used to with living in Mexico. Dealing with homophobes was a lot worse than public bathrooms where Kenny had earlier had a minor freakout because the toilet was disgusting. There was pee all over the floor. He had to stand in it to use it and he had even needed Armando’s help with flushing it because he wasn’t a flushing toilet. And so that on top of everything else had had Kenny worried about living in Mexico long before he was the victim of verbal abuse.

A little bit further down geographically there was Tim. He was living in Colombia with his girlfriend Melyza and he needed a job in order to stay. There was just one problem with that. His grasp on the Spanish language wasn’t as strong as it could be and he was having some problems with explaining his assets to the employment center. The lady there had asked him wouldn’t be easier if he just married his girlfriend. She didn’t know that Tim and Melyza were having problems or that Tim moved down there to work on those problems. It turns out Tim had cheated on his girlfriend. Its been a year since the cheating and Melyza was still struggling with it.

Melyza was therefore in no place wanting to get married. She was still trying to figure out whether or not she wanted to be with Tim and, for now, they needed to focus on rebuilding trust. Tim thanked the woman at the employment center for help, but her suggestion wasn’t going to get him anywhere and he still needed to look for a job. Tim also had other things to worry about. He was working on his relationship with both Melyza and her family. Her parents wanted Melyza to break up with Tim and she was resisting them. She told them that Tim wanted to make it up to her. Which he does want and so he was going to have to win over his in-laws as well.

Unfortunately for Brittany, her future in-laws hated her. They hated everything about her and they demanded that she change if she wanted to join their family. Yazan’s parents wanted Brittany to delete her social media. They didn’t like the pictures of her online with little clothing and they particularly hated a photo of her in a bikini. Yazan’s parents basically demanded that she delete everything. Only Brittany didn’t like being told what to do. She decided to keep her social media photos up and that angered Yazan’s family. It also upset Yazan himself. Yazan didn’t really defend Brittany like she wanted to be defended.

Yazan later came back. He told Brittany he still loves her and everything. He just didn’t want to make his parents any angrier. Yazan often sides with his family against Brittany and Brittany usually forgives him afterward. Brittany forgave him again tonight. She told him that she kept the photos up because she had been feeling petty about being told to do something and she couldn’t be reasoned with when she’s got like that. She also deleted a lot of stuff off her social media after that. Even if she did keep up the bikini photo. Brittany wouldn’t be Brittany if she wasn’t doing things she wanted like always.

And lastly, Ari’s mother had left to return to the States. This left Ari alone with Biniyam and she was later in a state because she wasn’t sure about her future with Biniyam or if she wanted to stay in Ethiopia now that her mother is gone.