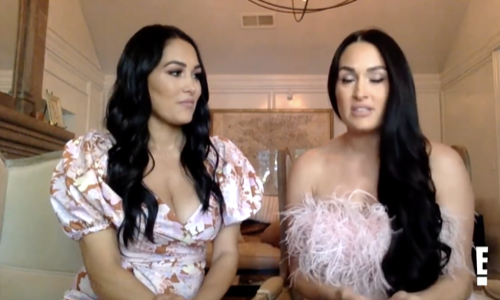 Tonight on E! their reality show Total Bellas featuring WWE superstars, Nikki & Brie Bella premieres with an all-new Thursday, November 12, 2020,  season 6 episode 1 called, “Bella Baby Bumps,” and we’ve got your Total Bellas recap down below! On tonight’s episodes, in the Season 6 episode, 1 premiere, as per the E Online synopsis, “Nicole and Brie’s dream of sharing their twin pregnancies hits a major snag; the release of the Bella’s memoir, “Incomparable” forces Nicole to open up about past sexual assaults; and Brie and Bryan worry that Nicole and Artem aren’t ready to be parents.”

Brie is upset after seeing her lady parts and how they different they look now that she is pregnant. Her sister tells her she is pregnant and needs to own it. A lot has changed for them. Bryan has been traveling. Artem has taught them how to dance. They have been walking together, eating, spending time, and more.

The next day, the sisters drink smoothies while talking about their upcoming memoir. Nikki is nervous about two major stories she shares in the book and how her mom will feel.

Nikki comes in later to find Artem building a bassinet. She thinks she wants to stay in Arizona near Brie. Brie comes in. They talk talking about babies and how to raise them. She thinks her sister needs to stay so they can get help. They have fun and swaddle Artem. He starts to realize that they do lack some knowledge but who is really prepared.

Later, Brie and Bryan FaceTime. She tells him how her sister is not ready and should stay next door. They haven’t even read any books to prepare. She thinks of her sister alone in LA and it seems scary.

The sisters talk with their mom by video who likes that everyone is wearing a mask now that she has Bell’s palsy. They then discuss their book and how she will read some things she didn’t know about, not telling her directly that rape is one of them.

Bryan is home with Brie and Bird. Nikki and Artem come over. Bryan and Brie have a baby challenge for them with a fake baby. They plan to put them through a boot camp.

Nikki comes home after her doctor’s visit and is upset she is told the baby has a speck on his heart. She needs to talk to their doctor right away and wants to drive to LA. She heads to talk to Brie who tells her to see her doctor just minutes down the road. She shouldn’t freak until she talks to the doctor.

The day has finally come. Their memoir is out. After 2 1/2 years, they are finally sharing what they have been working on. In the book, Nikki shares how she was raped twice as a teen and had a lot to share and overcome. Their mom calls. She is upset and even more so that she didn’t help when she could of.

Nikki and Artem head to LA and learn that their baby is okay. They then discuss having the baby in Arizona which would take some insurance changes. She teases him about fainting during birth.

Nikki and her mom talk by video. Her mom is still upset over the book. She gets emotional. At the end of the conversation, Nikki feels better.

Nikki and Brie head through the car wash with Bird, whose eyes bug out of her head as the car shakes and water comes down. Nikki shares that she has to have her baby in LA for health inspectors reasons. They are both sad about this.