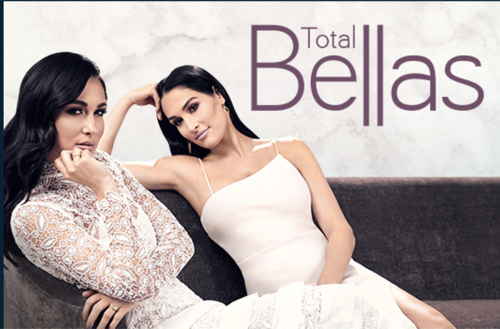 Tonight on E! their reality show Total Bellas featuring WWE superstars, Nikki & Brie Bella airs with an all-new Thursday, December 3, 2020,  season 6 episode 3 called, “A Bella Babymoon,” and we’ve got your Total Bellas recap down below! On tonight’s episodes, in the Season 6 episode, 3, as per the E Online synopsis, “The Bella family heads to Flagstaff for the babymoon; Brie and the others are worried after finding out that Artem and Nicole have not yet decided about the baby’s future.”

Nikki tells Brie and Artem that she and Bryan are going to Flagstaff for their babymoon. Brie asks if she and Artem can go with them. Nikki and Brie are looking for a home to rent, Nikki thinks it might be too hard to find two maybe they should stay together.

Their mom Kathy calls, Brie says they should invite her. Nikki has to break this to Bryan gently, she always does this.

At Nikki’s house, she tells Artem she is thinking about middle names for Mateo. He says in his culture, his son’s middle name should be taken from his name. She says she has been on the phone with her lawyers regarding her will and he should do the same. He says those things are not that urgent. She reminds him they need to find Godparents.

Nikki calls Brie, she says they want her as Godmother, would Bryan be ok with being Godfather. Bryan asks where they would baptize their baby. Bryan starts giving them a hard time about baptizing the baby Nikki says he is out and then says they got to go and ends the call.

At Brie’s house, she got Bryan a gift, a new bike. He says it will be great to take the bike to Flagstaff, that is when she tells him that Nikki, Artem and mom are joining them in Flagstaff.

Nikki mentions to Brie that Artem doesn’t have a will, Brie tells her that he has to get one.

At Brie & Bryan’s house, Kathy arrives, Birdie is thrilled to see her. Everyone gets in the SUV and are headed to Flagstaff. They arrive and everyone is really happy with the place they rented. They all sit down and Kathy says she wants to stay back from a walk they want to take, she wants to meditate, she is still dealing with her Bells Palsy. Her daughters are worried that she may be meditating for another reason other than her diagnoses. Brie and Nikki are worried that they are causing their mother’s stress. Artem says they should speak to her, gently.

Back at the house, the men are starting burgers, Kathy is outside getting smores ready. Nikki and Brie head outside to talk to Kathy, Nikki asks about her meditation session, she said it was great, then she fell asleep. Nikki asks if it has been effective, Kathy says she thinks so. The guys are watching from inside as the girls ask more questions, they rescue Kathy by asking for her help in the kitchen. The girls are bummed, they felt they were one minute away from having a deep talk with their mom.

The next day, everyone talks about their game plan for the day. Bryan says Artem is going with him to have a spiritual session that has helped him with depression. Bryan says it will be good to prepare the two for fatherhood. Bryan asks Brie and Artem if they have a will, she tells him that Artem doesn’t. Kathy says that Artem should get a will, what if things don’t work out. Brie says she would get Mateo, he says she travels a lot, so he would get him.

Nikki and Artem sit down near the water, she says they need to have a plan in case anything bad happens. It is hard too have these conversations, but it is needed. Artem is not a planner, but he understands the importance of it – he wants the best for his son. He tells Nikki to have the baby first and then they can decided what they want to do.

Artem and Bryan are bike riding to the session they talk about being dads and how they both want to always be there for their kids. Kathy has surprised Nikki and Brie with ice cream and toppings for dinner. They talk to Kathy about stress, they think they caused her a lot with the book. They want to set up an appointment for her to get rid of the stress with her Bells Palsy. Kathy is glad to talk to the girls, it’s hard, but it brings them together.

The guys arrive for the session with Shaman, Rahelio Rodriguez. Bryan is right into the whole experience, but Artem isn’t quite into it, until he starts talking about becoming a father. It’s way to dark to ride their bikes back into town, so they are going to stay overnight. The guys are going to prank the girls, Bryan is going to tell them he is changing his name to Jesus. Meanwhile, the girls have been getting weird texts from them.

Bri and Nikkie decided to go look for the men with Kathy. They find their bikes, but they have to go into the woods, it is pitch black, they make Kathy go first. They find them, they both look calm and peaceful.