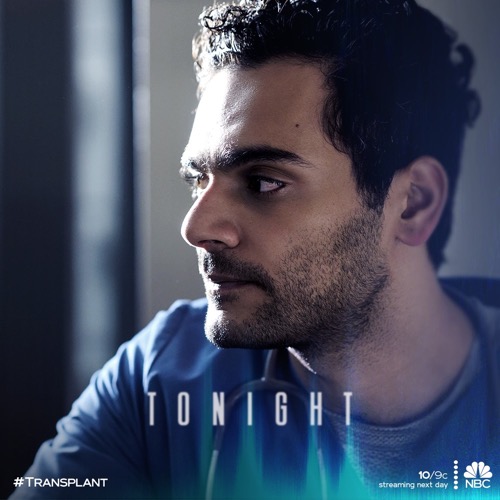 Tonight on NBC the hit Canadian drama Transplant makes its American premiere with an all-new Tuesday, September 8, 2020, episode and we have your Transplant recap below. In tonight’s Transplant season 1 episode 2, “Tell Me Who You Are,” as per the NBC synopsis, “Bash’s experience as a doctor in Syria informs his unconventional approach as he joins the staff at York Memorial.”

Bashir Hamed was given a second chance to be a doctor again. He was a doctor back home in Syria and he had to leave the country because of the ongoing civil war there. Bash fled from his home. He came to Canada. He came all that way to give his sister a better life and so Bash didn’t want to be working in a restaurant for the rest of his own life. He wanted to be a doctor again. He was given this second chance because he saved the life of Dr. Jed Bishop. Bishop had interviewed Bash for a job and he hadn’t given it to him because he thought the job should go to someone else. It was until Bash saved Bishop’s life in a horrific accident that Bishop was convinced.

Bishop realized how wrong he was about Bash. He decided to give Bash a job at his hospital and so Bash became a doctor again. Bash went to work at his new job. He was all excited to start and so imagine his surprise when he was met with a bunch of confused people. The other doctors weren’t aware he was joining their team. They were surprised when he just sorta pitched in and so Bishop had to tell them that Bash was one of them now. He was a doctor at the hospital. Bash was also told he needed to change clothes and find out where he needed to be before he could start treating patients.

Bash trained overseas. His experience there while crucial was not going to be helping with his residency now. Bash had to start from the bottom. He was a first-year resident again and he was put under Dr. Wendy Atwater’s direction. Atwater wasn’t sure about Bash. She thought Bishop was taking a risk by hiring him and so she had Bash work with Dr. Magalie Leblanc. Mags and Bash knew each other. She was the doctor that treated when he came in as a patient. She’s seen what he could do and she was there to advise him as his senior. Mags wasn’t like Bash. She took the cautionary approach and she advised Bash to do testing before drawing any conclusion.

Mags would watch Bash treat someone. She would listen to what he has to say and then she would remind him of what tests they had to do to prove it. Mags could help him with almost anything. What she couldn’t help with were his transcripts. Bash studied medicine at the University of Aleppo and the hospital needed certified transcripts of his time there. They weren’t going to just accept Bash’s pdf. They needed transcripts from the university or Bash couldn’t work as a doctor in Canada. Bash was told all of this and he said he would get them to the proper officials. He doesn’t really know how he was going to do it, but he wanted to be a doctor and so he was going to give it a try.

Bash continued working at the hospital in the meantime. He treated a woman with liver failure and in her chart, he wrote that she has suspicious bruising. Bash hadn’t meant anything by it. He thought the bruising could be from further organ damage. He didn’t know that his remark would be flagged or that Children Services would get involved. It seems his patient, Irene Harper, had been flagged once before when her young daughter fell down the stairs. There was an investigation at the time and Irene and her husband were cleared of any wrongdoing. Then Bash wrote that he saw suspicious bruising on a patient.

Many feared that the wife being abused as well. Children Services stepped in and they thought the best course of action would be to take the little girl into foster care just until there was a second investigation carried out. Bash was there when Irene’s daughter was taken away. He saw for himself how different things are in Canada and that he needed to be more careful with his remarks. He didn’t mean suspicious in that way. He asked if he could change what he wrote and Children Services told him it was too late for that. They took the little girl away. Her father was angry and he blamed Bash because he overheard Bash.

Mr. Harper thought his daughter was taken away because Bash couldn’t understand English. He refused to speak to or listen to Bash and so it was just Mags he dealt with. He made Bash feel worse than before. Bash asked his fellow doctor who checked out the child and he found out there were no bruising or any signs of abuse on the child. She was in a healthy condition. She was fine and so Bash thought she should return to her father. He went to speak to Mr. Harper and Harper apologized for being rude to him. He said he wasn’t racist. He was just scared. Harper was also unsteady on his feet and Bash caught him when he passed out.

Before he did pass out, Harper said he and his family ate healthily. They all ate the same thing. They eat chicken salads like always and unfortunately both Bash and Mags forgot about that when Harper began showing the same symptoms as his wife. Bash acted without Mags approval to treat the patient. He treated Harper on his guesswork and he was wrong. He upset Mags with what he did. He also got into trouble with Atwater. Atwater removed him from Harper’s case and he was told that he would have to be in sutures for the rest of the call. Bash was wandering around the hospital when he came back to the Harper family.

Bash talked to Mags. They tried to figure out what went wrong and only then did they remember the dietary issue. Bash had wanted to question the little girl. She was still at the hospital and was under the care of Children Services. Only Mags told Bash he couldn’t intervene. She said she would handle it and she did. She spoke to the only healthy member of the Harper family. She asked the little girl what her parents ate and what she didn’t. It turns out Layla Harper hates mushrooms. She and her father would harvest vegetables from the local garden. He and his wife would eat the mushrooms and not Layla who always picked it out of her salad.

Mags finally realized what was causing her patients to suffer organ failure. She now knows how to treat them and all the while Bash was told he should go home. The hospital was all wondering why he was there. The doctors and even the nurses thought Bishop was wrong to hire Bash. One nurse suggested to Bash that he should think of Plan B and he told her that this was his Plan B. It was his only plan. Bash was a doctor and he wanted to continue being one. The others were all reacting negatively because of one patient and meanwhile, there was another doctor at the hospital that overlooked a woman bleeding out.

Thankfully, Dr. June Curtis realized her mistake in time. She was able to change course and save her patient’s life. She was given leeway to do that and yet Bash was shunned for one mistake. Bash came to the hospital the next day. He ran into June and she advised him not to apologize. She told him that would just make things worse. Bash went in front of Bishop. Bishop chewed him and, after he was done, Bash informed Bishop that there might be an issue with his transcripts. He said there was a chance that the university in Aleppo might never realize. He also said it changed nothing because he is the doctor that he swore to Bishop that he was.

Bishop kindly asked Bash to leave his office. He didn’t fire him and so Bash took that as a good sign. He went back to work. He saw Harper and they were doing better. Bash was later found by the police. They wanted to ask him about his friend who worked at the restaurant. His friend was wanted for an immigration violation. He didn’t have papers and the police were looking for him. Bash told them that he didn’t know where this friend was, but secretly he knew where he lived and he had just seen him recently.